One killed, four injured by armed attacks in Ankara 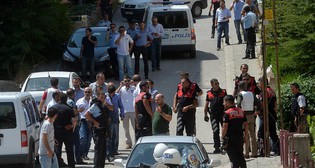 by AA Aug 23, 2014 12:00 am
A gunfight between police and an unidentified group in the Turkish capital of Ankara has left five people, including three police officers, injured. One of the suspects Bülent A, who was severly injured in the gunfight, died in hospital. Bülent A. is also reportedly claimed as a mafia leader.

"Special Forces have been dispatched to the area in the Çankaya district to catch the gunmen", police said on Saturday.

Police officers are also searching the car that the gunmen left behind for further evidence.

The injured man, a woman and security forces are being hospitalized, police added.

The cause of the gunfight remains unknown, as the search for the other suspects continue.
Last Update: Aug 24, 2014 3:46 pm
RELATED TOPICS