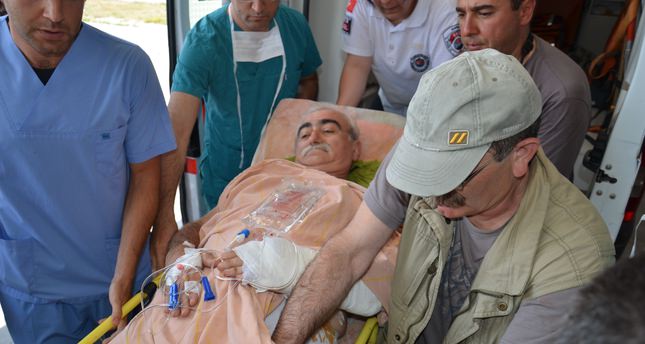 by AA Aug 24, 2014 12:00 am
Renowned Turkish cardiovascular surgeon, Bingür Sönmez was assaulted by an unidentified person, or people, in a square in the eastern province of Kars in Turkey on Sunday, reported an AA correspondent in the region

Following a commemoration for Sarikamış martyrs, who fought in World War I, Bingur Sönmez was shot in the arm and the leg in Gaziler square before being taken to Sarikamış Public Hospital, according to a hospital official.

"Turkish surgeon's medical condition is fine, he is conscious. He got shot in his leg and arm so we performed a medical intervention and he is taking a rest in his room now," said Kars Kafkas University research hospital head doctor Miktat Kaya.

Meanwhile, former Sarikamış mayor Ilhan Ozbilen was taken into custody as a suspect. Police have not yet indicated a reason for the detainment.

Apart from his professional duty as a cardiovascular surgeon, Bingur Sönmez is a prominent figure in the community, presiding an association called the "Sarikamış Community of Interest".
Last Update: Aug 24, 2014 4:05 pm
RELATED TOPICS