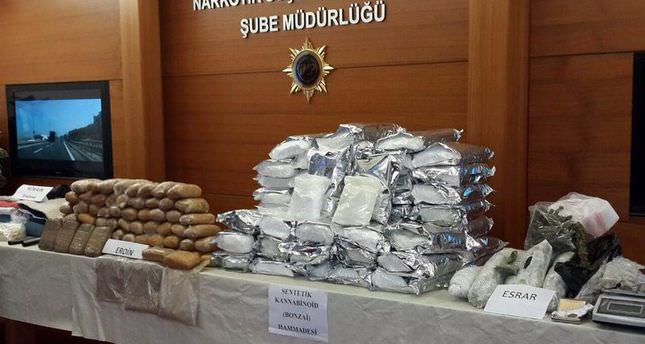 by Daily Sabah Aug 25, 2014 12:00 am
Bonzai, a cheap and addictive synthetic drug whose use has escalated among Turkish youth recently, has become a chief reason for emergency room admissions in Istanbul, according to a report in the Turkish daily Milliyet. Even a small intake of the drug can end up with a visit to the emergency room while fighting between users and peddlers have also led to a rise in criminal cases like stabbings and shootings.

The Milliyet daily reported that 25 bonzai users suffering from the drug's effects were admitted to a hospital in Ümraniye on Istanbul's Asian side in the past two weeks, two of whom died. The majority of the admitted users were teenagers and children who lost consciousness or attacked others under the influence of the lethal drug. Doctors and nurses have become frustrated with bonzai users' uncontrollable behavior and resistence to treatment efforts. In another hospital in Şişli on Istanbul's European side, 10 people were admitted to the emergency room for bonzai use last week alone. The daily reports that another hospital in the city's Bağcılar district had 20 bonzai users admitted in one month after they were hospitalized for drug use.

Bonzai, described as synthetic cannabis, has similar characteristics to marijuana but is more destructive to the metabolism as it consists of synthetic materials. It causes rapid brain damage and its symptoms include schizophrenia-like wild behavior. The drug is also blamed for sudden heart failures. Doctors say that regular bonzai use often leads to kidney and liver failure within two months.

Besides Istanbul, bonzai use threatens the youth in other cities as well. In İnegöl, a district of the Bursa province south of Istanbul, 11 males between the ages of 15 and 23 were hospitalized for drug use over the weekend. Four people, including two brothers, were hospitalized in Ordu, a northern Turkish province for bonzai consumption on Saturday and they remain in critical care.

The notorious drug is prevalent despite continuous operations by police against gangs dealing bonzai. Meanwhile, the Ministry of Family and Social Policy announced a project to eradicate the use of bonzai through more efforts toward the rehabilitation of addicts, raising awareness to its dangers and informing parents on how they can detect whether their children use the drug. The ministry will announce "a detailed roadmap" on the project in the coming days.