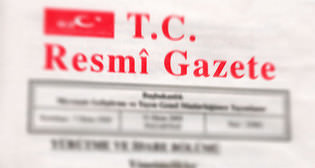 by Daily Sabah Aug 25, 2014 12:00 am
The Turkish government ordered the freeze of assets belonging to six foreigners connected to the terrorist organization, al-Qaida. The decision was published on the Official Gazette on Sunday.

The decision came after six foreigners were blacklisted by the United Nations Security Council that imposed sanctions on the men for financing and recruiting militants for al-Qaida. They are accused of having links to al-Nusra Front and the Islamic State of Iraq and al-Sham (ISIS). Al-Jahani allegedly fought in the ranks of groups linked to al-Qaida in Syria while al-Ajmi is accused of financing the Nusra Front. Al-Adnani is a spokesman for ISIS while Said Arif, a former military officer, is accused of recruiting militants for the Nusra Front in France and northern Africa.

Turkey, often accused of supporting ISIS - the group that took 49 Turkish nationals hostage in Turkey's consulate in Mosul - and other former al-Qaida affiliates such as the Nusra Front in Syria at one point, also faces threats from those very same groups.

Al-Qaida launched its first major attacks against Turkey in 2003. An al-Qaida offshoot in the country launched four truck bomb attacks in Istanbul in 2003 that killed 57 people. In the wake of attacks, Turkish security forces started a series of crackdowns against al-Qaida militants and supporters in the country, and dozens of people with ties to the terrorist organization were arrested over the past years.
Last Update: Aug 25, 2014 10:39 am
RELATED TOPICS