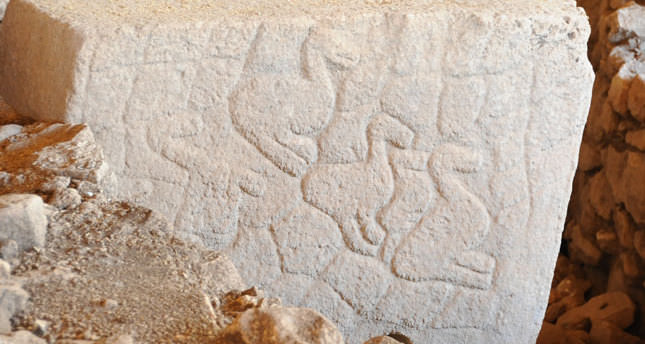 Regarded as the oldest temple complex in the world, Göbeklitepe is reported to be the oldest known sculpture workshop after the examination of new findings

The Göbeklitepe excavations were carried out with the collaboration of the German Archeology Institute and Turkey's Ministry of Culture and Tourism and were conducted under the presidency of recently deceased Klaus Schmidt, left 20 years of findings behind.

Many artifacts have been unearthed during the archeological excavations. Characterized as "the zero point of history", Göbeklitepe, dating back 12,000 years, is regarded as the oldest temple center in the world. Speaking to Anadolu Agency (AA), head of the art history department at Harran University Assistant Professor Cihat Kürkçüoğlu said the Neolithic era human sculpture, boar sculpture shaped from lime stone, arrow heads from flint with foxes and bird bas-reliefs were unearthed during the excavations. He said there is no other example at such a monumental scale around the world that is as old as the one in Göbeklitepe.

Kürkçüoğlu emphasized that they unearthed small Venus sculptures dating to 10,000 B.C. and 20,000 B.C. "However, stone bas-reliefs on the T-shaped obelisks at Göbeklitepe and artifacts unveiled in Nevali Çori are the oldest sculpture examples in the world," said Kürkçüoğlu.

He further said that "Balıklıgöl Man" or "Urfa Man," a sculpture carved out of limestone unearthed in 1995, around Balıklıgöl, dates to 10,000 B.C. He said that the sculpture, which is 1.8 meters high, is regarded as the oldest life-size human sculpture. He said the oldest examples of arts which are made by shaping material are in Şanlıurfa. He said that Göbeklitepe is a temple center as well as the oldest sculpture workshop. Kürkçüoğlu said, "Though we expected to find primitive sculpture and stone bas-reliefs, we came across developed sculptures that have aesthetic and artistic values.

Some compositions at Göbeklitepe are so beautiful that they make today's graphics jealous. I believe we will unearth much older prototypes as the excavations move forward." Kürkçüoğlu said that he asks sculpture and fine arts department members when and where the history of arts begins but nobody says Göbeklitepe. "I say 'you will start it from Göbeklitepe.' The beginning of arts starts with Göbeklitepe," Kürkçüoğlu concluded.
Last Update: Aug 26, 2014 11:47 am
RELATED TOPICS