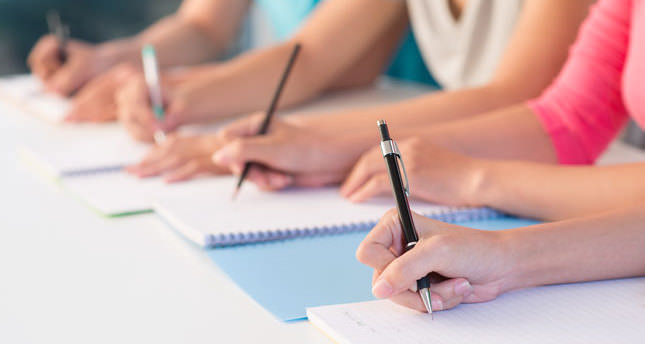 by Nazif Karaman Aug 27, 2014 12:00 am
Prosecutors launched an investigation into allegations that Gülenists were involved in irregularities of the Test of English as a Foreign Language (TOEFL) exam, a worldwide test to determine participants' English language proficiency. The Gülen Movement, which evolved into a politicized organization from a faith-based movement, faces accusations of helping their followers cheat on the (TOEFL) exam.

Acting on a tip from a former Gülenist, the chief prosecutor's office in Istanbul launched a probe into the issue. The anonymous Gülenist claimed the movement's followers benefited from cheating at TOEFL test centers in Turkey. The former Gülenist told prosecutors he used to work with a team that helped cheaters and outlined how the scheme worked.

According to his account, lecturers with fluent English from universities known for their ties to the Gülen Movement sit for the exam on behalf of Gülenists who failed in previous TOEFL exams. The movement allegedly set up a "network" of its followers who want to achieve high scores in the exam, and members of this network appeal to senior officials of the movement when they need assistance in passing the exam. Passing the exam facilitates the lecturers' promotion at universities and participants can also apply to several state agencies that hire staff based on their TOEFL score.

Under the scheme, TOEFL hopefuls legitimately apply to take the exam. On the day of exam, they contact fellow Gülenists working at the test center. Once there, they hand over their IDs to their replacement who take the exam for them. They cannot be detected easily as test centers are already manned with staff with links to the Gülen Movement. Also, the replacements do not score high in the exam to avoid attracting attention in case of an investigation.

Gülenists already face a series of allegations for helping their followers cheat on several exams for admission into state agencies, law enforcement agencies, et cetera. In February, authorities cancelled a foreign language examination over suspicions that the movement leaked the questions to some participants. In the future, the International English Language Testing System (IELTS) exam will be replaced with the TOEFL for the promotion of lecturers at universities. It is not known whether the TOEFL, a globally accepted exam, will be replaced with another exam for testing the English
proficiency in the wake of allegations.

The movement, that launched a defamation campaign against the government last year, is accused of widespread infiltration into state agencies such as Turkish National Police and judiciary. Commonly referred to as the "parallel state" due to high level of infiltration, the movement is also accused of carrying out the illegal wiretapping of prominent names in the Turkish politics.
Last Update: Aug 27, 2014 1:48 am
RELATED TOPICS