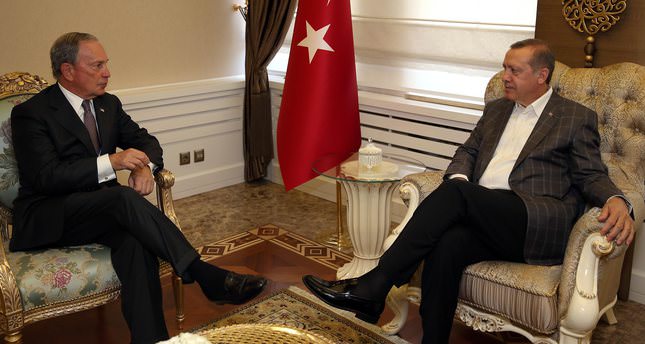 Former New York mayor and billionaire businessman Michael R. Bloomberg is looking to further cut down the smoking rate among Turks after his global anti-smoking initiative took hold in the country

Bloomberg was in Turkey in June where he met anti-smoking activist and then-prime minister, current president-elect Recep Tayyip Erdoğan who is known for his staunch efforts to curb smoking in the country.

An article published in the New York Times said that Bloomberg aims to further decrease the smoking rate in Turkey as well as preparing projects to resolve Istanbul's persistent traffic problem.

Through his Bloomberg Foundation, the businessman, who stepped down from mayor's office last year, pioneered efforts for the "smoke-free spaces" campaign in Turkey, like he has in other countries. Turkey, however, was among the countries that responded best to the anti-smoking campaign, implementing laws banning smoking in public places, restaurants etc and offering medical assistance to smokers to give up the habit.
The New York Times article quotes Bloomberg speaking at a meeting with Turkish doctors and public health officials. "Turkey is a great example (in terms of antismoking efforts) and it can be translated to other countries," he said.

Bloomberg imposed the smoking ban in New York in 2003 and now dedicates his time and his $32.8 billion fortune to help the implementation of the ban in other cities as well.

The article also notes that the Bloomberg Foundation will carry out projects to reduce traffic in Istanbul and other cities in the world, though it does not elaborate on those projects.

Noting Bloomberg's trip to the hometown of Recep Tayyip Erdoğan on his private jet, the article says although the two men have different world views, their concern about smoking's impact on public health is shared. Bloomberg describes tobacco companies as perpetrators of "murder" while Erdoğan likens cigarette-selling to terrorism, the article says.

Turkey's efforts to combat widespread smoking habits were praised in a health report by the Organization for Economic Cooperation and Development (OECD). The report noted that from 2000 to 2012, the country has achieved significant progress in reducing the number of smokers. The number of daily smokers among adults decreased to 27 percent in 2012 from 32 percent in 2003. However, the report adds the smoking rate among Turkish adults is still higher than the OECD average of 21 percent.

Turkey, the inspiration for the phrase "smoking like a Turk," had introduced comprehensive legislation against the unhealthy habit in 2009, banning smoking in all public places and was announced by the sixth European Conference on Tobacco or Health as the fifth country among the 34 others to have the most effective measures against smoking.