Power back on in southeastern town after protests 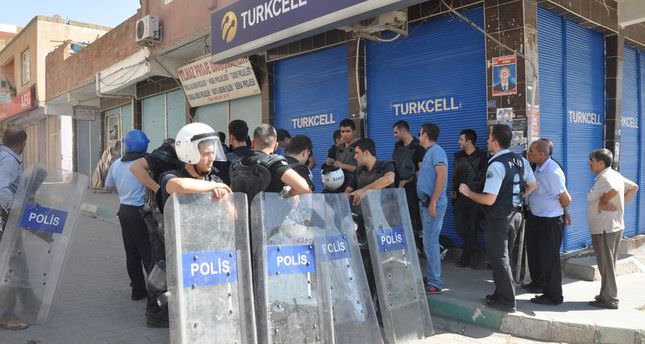 by Daily Sabah Aug 29, 2014 12:00 am
Three days of protests by farmers in the southeastern town of Derik over frequent power outages ended after the power was restored late Thursday. Prime Minister Ahmet Davutoğlu ordered his subordinates to resolve the issue of the farmers and restore the power as soon as he took office.

Since Monday, farmers have been protesting the lack of electricity in the towns of Kızıltepe and Derik in the southeastern province of Mardin. They blocked roads connecting several towns in the province and confronted security forces. Farmers complained that power outages dealt a blow to the irrigation of their fields.

Davutoğlu held talks with Mardin lawmakers from the Justice and Development Party (AK Party), and asked them to resolve the dispute. The prime minister also said farmers whose electricity service was cut off due to overdue debts will be subsidized through an agricultural loan program. New regulations will also be implemented by the new Cabinet announced on Friday to put an end to the long-standing dispute between farmers and the private-run company operating the electricity utility in the southeast.

Abdurrahim Akdağ, one of the lawmakers who met Davutoğlu, said the dispute between farmers and the utility company stemmed from a "wrong approach to the issue" by the company. "We work to prevent farmers' loss of their crops due to power outages. Farmers that cannot afford to pay their bills will be subsidized, and they will have the amount of their unpaid bills reduced from the loans the state provide for farmers," he said.

The farmers' protest, which turned violent at times with protesters clashing with security forces, was a culmination of similar protests across southeastern Turkey where illegal electricity use is widespread. Protesters had filed a complaint in the local court for resumption of power, and the court ordered the power be restored on Thursday.

Dedaş, the company running the utility had said the power outage was due to excessive use of electricity while irrigating that led the electricity infrastructure in the region to malfunction, as well as unpaid bills and illegal use.

Speaking on the issue on Friday, Minister of Energy and Natural Resources Taner Yıldız said he understands the protesters and also that the utility company "that needs to profit from supplying electricity."

"Farmers can negotiate a payment plan for unpaid debt, and I believe both sides will reach a deal. We cannot tolerate illegal electricity use. Citizens have to pay for what they consume. The electricity distribution company already facilitated the payment of overdue debt, and we will make it easier for the farmers by adding the bill to agricultural loans," he said.