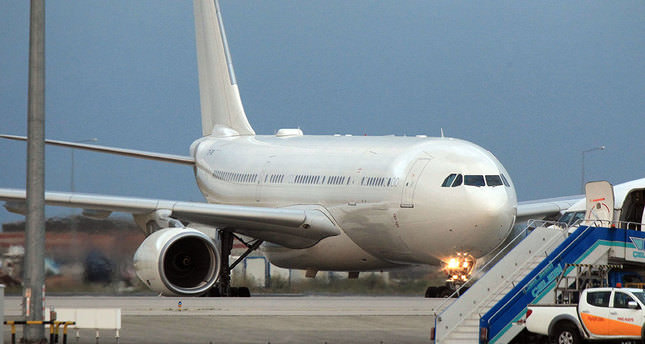 by AA Aug 29, 2014 12:00 am
As Turkey welcomes its new president, Recep Tayyip Erdoğan has also gained possession of a new high-tech plane complete with meeting rooms and a missile defense system.

Just after former prime minister Erdoğan was sworn into office as the twelfth president of Turkey on Thursday, the new Airbus A330-220 touched down in Istanbul on Friday.

Ordered over two years ago, the plane was reconfigured by Texas-based Gore Design Completions for use as a presidential aircraft. The plane will be painted and controlled by Turkish officials and later will become ready for the president's use.

The previous official plane, a Gulfstream G550, had the capacity to fly 12,500 kilometers non-stop but lacked space to accommodate large delegations.

The new plane flies at least 15,000 kilometers non-stop, has 90 seats and features meeting and resting rooms.

Although there is no official word on cost of the plane, aviation expert Mehmet Genç told AA that an Airbus A330-200's cost around $221 million in 2014 but noted that Turkish Airlines could have bought it at a lower price because of close ties with the European manufacturer.

"The reconfiguration was believed to be cost at least $100 million," he added.

The Turkish Prime Ministry and Turkish Airlines have not commented further about the airplane.