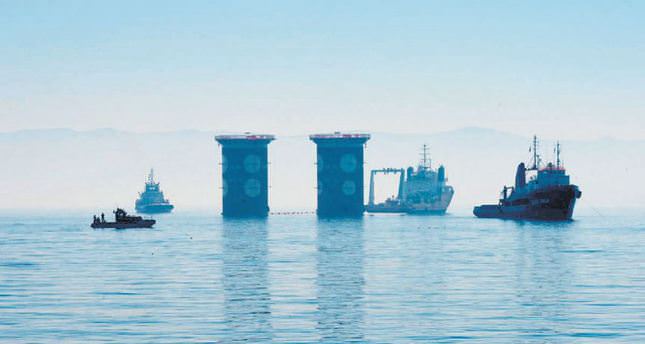 by daily sabah
Sep 01, 2014 12:00 am
The construction of the bridge that will span the length of the Gulf of İzmit near Istanbul is near completion and will be opened next year, according to reports.

The project, which will be the fourthlongest suspension bridge in the world when complete and will cut travelling time between Istanbul and Yalova, on the Marmara Sea coast, to 6 minutes. The bridge is part of the project to build a modern highway between Istanbul and İzmir, Turkey's third most populous city.

When complete, it will be possible to travel from Istanbul to İzmir in 3.5 hours. A Haber reporter visiting the construction site said the bridge's abutments are complete, as is one kilometer of its eventual three-kilometer span. The bridge will have six lanes and a pedestrian road. The bridge is expected to be completed next year.
Last Update: Sep 01, 2014 1:59 am