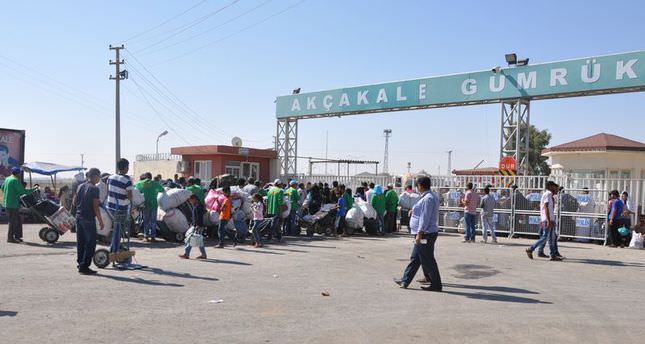 by Safure Cantürk Sep 01, 2014 12:00 am
Reaching out to displaced Syrians in the country, Turkey is set to offer education to Syrian children at state-run schools and employ Syrian teachers in Turkish schools.

Convening upon the order of President Recep Tayyip Erdoğan, a committee overseeing Syrian 'guests' of Turkey, decided to provide a series of opportunities for Syrians in the country including employment, citizenship and education. The committee drafted a roadmap for 1.3 million Syrians who took shelter in Turkey in the wake of the four-year-old conflict in their country. As part of the roadmap, skilled labor among Syrians will be included in Turkey's labor force. For instance, Ministry of National Education will employ Syrian teachers for Arabic lessons at the country's Imam Hatips, schools that primarily focus on a theological curriculum. Syrian teachers will be also employed as "foreign lecturers" at Turkish universities' Islamic theology and Arabic language departments.

The country also seeks to address the plight of Syrian children who turn to begging on the streets to help their impoverished, homeless families. In the initial phase of a new project, 150,000 Syrian children will be provided primary and elementary education. They will be taught curriculum they were supposed to study in Syria, but in addition to being taught Turkish. Schools operating by noon will be allocated to Syrians children in the afternoons. Currently, 70,000 Syrian children attend grade school classes at tent camps for displaced Syrians in southern Turkey while 65,000 children attend schools operated by local administrations and charities in several cities.

Turkey already offers vocational and Turkish courses for Syrians in every province they reside through municipalities' free courses for the Turkish public. The latest figures show 1,300 Syrians have completed vocational courses so far.

In August, Turkish officials including ministers, top military officers and intelligence officials gathered in Ankara for a meeting to discuss the state of Syrians referred to as "guests" by the government to address the concerns regarding the increasing number of Syrians in Turkey. Officials held talks on issues such as the health of Syrians, their economic status and problems they faced such as hostilities incited in the cities with a large Syrian population.

Several Turkish nongovernmental organizations have been calling on the Turkish authorities to implement regulations to regulate the status and rights of Syrians in the wake of anti-Syrian "unrest" especially in cities bordering with Syria.
Turkey has spent $3.5 billion (TL 7.6 billion) on displaced Syrians and accommodates over 200,000 people in state-of-the-art camps, but a growing number of those unable to stay in crowded camps are challenged by poverty and unemployment.