Turkish pilgrims depart for Saudi Arabia ahead of hajj 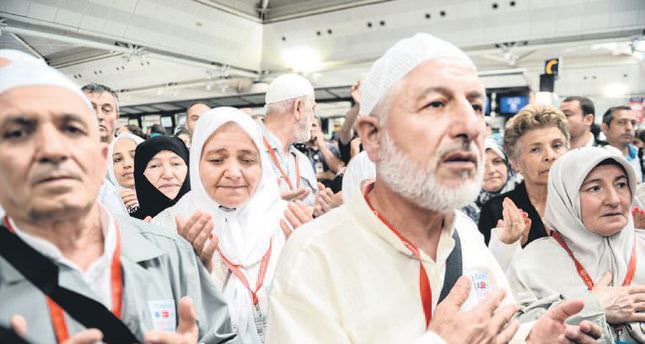 by AA Sep 01, 2014 12:00 am
The first group of Turkey's Muslim pilgrims who will perform the annual hajj in October, left for Saudi Arabia from Istanbul yesterday. A group of 400 would-be pilgrims were sent off at a ceremony in Istanbul's Atatürk airport amid tears and prayers from their loved ones.

Istanbul Governor Hüseyin Avni Mutlu and other local officials were among those seeing off the pilgrims at every age that will fulfill their compulsory religious duty.

The seeing-off ceremony was an emotional affair for pilgrims and their families although all pilgrims expressed their excitement to attend the hajj. "We will pray for all Muslims, especially those suffering in Gaza and Egypt," said Ahmet Yıldırım, a pilgrim traveling with his wife and daughter.

Meryem Hazırcı said she waited to seven years to go to "sacred lands." Due to a quota imposed by Saudi Arabia on the number of pilgrims, Muslims sometimes have to wait for years to be included on the list of Turkey's Presidency of Religious Affairs, which oversees the hajj travel. The presidency draws lots to determine the would-be pilgrims. "Allah granted my wish this year," she said. Nuriye Şükürbeyoğlu already performed the hajj. "It is nice to go back. I have waited for eight years for my previous pilgrimage," she said.