A bridge on Çanakkale Strait finally in the works 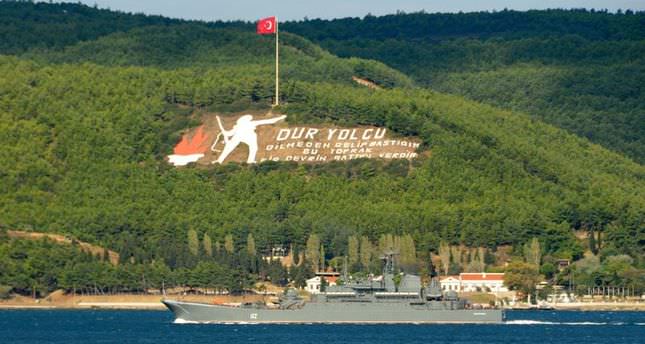 The new government in Turkey unveiled future transportation projects including a long-awaited bridge over Çanakkale, or the Dardanelles Strait, and a third highway for Istanbul

The new government in Turkey unveiled future transportation projects including a long-awaited bridge over Çanakkale, or the Dardanelles Strait, and a third highway for Istanbul

Minister of Transportation, Maritime Affairs and Communications Lütfi Elvan announced plans for a bridge, a highway and an expansion of the country's land transportation network on Monday.

Seeking to offer an alternative route for traffic into Europe from Turkey and vice versa, the government greenlit plans for the construction of a bridge in Çanakkale over the Dardanelles Strait, a gateway to the Marmara and the Black Sea. "Motorists travelling from western provinces like İzmir, Denizli, Kütahya and Manisa as well as Bursa (south of Istanbul) will be able to bypass Istanbul when travelling to Europe. This will significantly relieve the traffic in Istanbul," Lütfi Elvan said.

The government announced plans for the bridge in 2012 that would connect the two sides of the Çanakkale province. However, the plans for the three-lane bridge, believed to be over 3,600 meters long, appeared to have been scrapped until Elvan's statements. A bridge has never been planned before for the strait, which is the only maritime outlet for littoral countries of Black Sea, although Persians, en route to Greece, are believed to have passed over the strait via a makeshift bridge consisting of ships connected together by ropes in the fifth century B.C.

The government will concentrate on highways to ease traffic and improve travel times, Elvan also said. Citing the TL 10 billion ($4.6 billion) Turkey has spent on highway investments, Elvan said, "Some people claim we put the highway construction on hold or slowed it down. This is entirely wrong. For instance, we are undertaking the highest investment in the history of Republic of Turkey this year, with TL 10 billion spent so far. The expenditure for the highway construction will reach TL 14 billion by the end of the year," he said.
Elvan said they would open "an era of highways."

"We don't have highways stretching to the southeast from Edirne in the northwest yet. A tender is planned for this year for the construction of a highway connecting (the capital) Ankara to Niğde (a central province connecting the capital to cities further in the south and southeast)," Elvan stated.

Istanbul, the country's most populated city at 14 million people, bears the burden of heavy traffic in the country as it is located on the crossroads connecting Europe and Turkey, and areas in the south and east of Turkey. Through new projects, the government plans to relieve the incoming traffic to the city as well as the Marmara region where Istanbul and country's industrial hubs are located. "The existing motorway and the highway are not sufficient. For this reason, we plan to construct a new highway and its tender will be launched as soon as possible. It will stretch from Sakarya (in the northern Turkey, east of Istanbul) to Tekirdağ (in the northwestern Turkey, west of Istanbul) and will be further extended to Çanakkale in the south. We aim to relieve the traffic stemming from commercial transportation from and to Aegean region (in western Turkey)," Lütfi Elvan said.

The minister also noted that new high-speed train projects were underway including a speed train that will connect the country's north and south. "Our goal for 2023 (100th anniversary of Republic of Turkey) is to complete a network of high-speed trains from Edirne in the northwest to Kars in the easternmost Turkey. Speed train lines between Ankara and Sivas and another between Ankara and İzmir are being developed and we plan to extend the railroad network for speed trains further to the east, to Erzincan and Kars," Elvan said.