Children of war meet in the Turkish capital 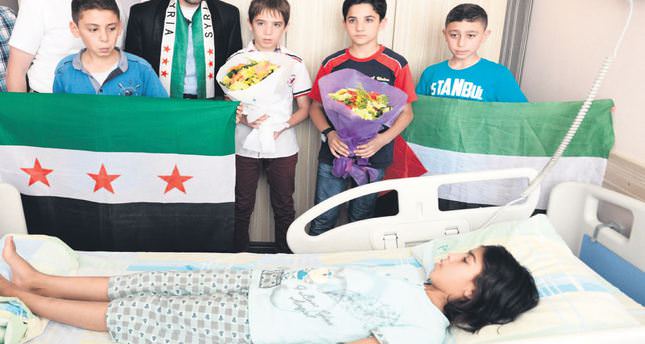 by AA Sep 02, 2014 12:00 am
Children of displaced Syrian families living in Turkey met yesterday with Palestinian children who were wounded in the Israeli attacks and are now being treated at a Turkish hospital in the capital Ankara.

Far from their troubled countries, Syrian and Palestinian children, who have both been the victims of vicious violence back home, have come together in peace.

A Turkish NGO organized the meeting of Palestinian and Syrian children at the Yenimahalle State Hospital in Ankara. Syrian children handed flowers and gifts to their southern contempories who were injured in Israel's devastating attacks in the Gaza Strip.

Muhammad Yazan, 13, a Syrian boy who fled his war-torn country, said they shared their pain with Palestinian children. "Both you and us have a war in our countries. In Syria, hundreds die every day. We used to hear nothing but the noise of planes, tanks and guns. We used to pray not to die, not to lose our mothers and fathers.

We were very scared. Now we can sleep without fearing death because we are in Turkey now. Turkey helped us but millions of our brothers and sisters in Syria are still scared," he said. Yazan said he was looking forward to returning to Syria and hopes to become an architect in the future. "I want to rebuild my country. I want peace and I don't want to see anyone getting killed," he said. Yousuf Khudra, 10, said they can't have "good dreams" any more because of the war in Syria.

Ahmed Elseid, 12, said many of his friends lost their fathers or mothers and became "lonely." He said he missed going out and playing games in Syria. The young boy advised his Palestinian friends to "stay strong." "Don't feel alone here," he said. "You will be fine and your suffering will end one day," he added.

Muhammad, a Gazan boy undergoing treatment in Turkey, said he would never forget the war because of burns on his face. "It is difficult for us to forget the war with injuries to our bodies.

I hear the sound of bombs whenever I close my eyes. I hope children younger than us will not suffer like we did," he said. "Inshallah (by God's will), the war will end in Palestine and Syria. It is more difficult for Syrians because they fight each other. In Palestine, Israel attacks us. Still, we suffer all the same.

But both us and our Syrian friends will work for peace. We will help others suffering from wars," Madleen Maged Abu Taweela, another Palestinian, said.