Istanbul to get its own Internet domain name 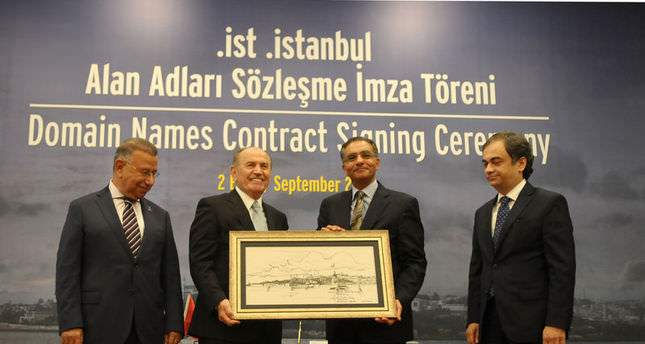 by Daily Sabah Sep 02, 2014 12:00 am
The Municipality of Istanbul signed a protocol with ICANN, The Internet Corporation For Assigned Names and Numbers, for the registration of .ist and .istanbul as domain extensions. Istanbul Mayor Kadir Topbaş and ICANN CEO Fadi Chehade attended a ceremony yesterday in Istanbul for the signing of the protocol.

Mayor Topbaş said Istanbul was "in a position that can influence the world in many fields" and the municipality is exerting efforts to turn Istanbul into "a hub for everything." Mentioning that few cities had their own domain names, Topbaş said, "Istanbul's presence will be felt on the Internet as well.
I believe it is a great opportunity to boost recognition of Istanbul and further expand its role as a financial hub."He emphasized that the city became the first out of 81 cities in Turkey to have its own domain name.

ICANN CEO Fadi Chehade said at the ceremony that Istanbul managed to preserve its past while building its future, unlike other cities. "Istanbul is a unique city and imitated by others. It will now have more (online) visibility and websites will benefit from those new domain names," he said.