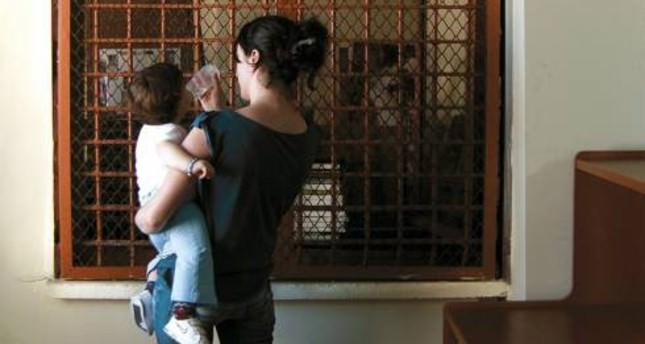 by Daily Sabah Sep 02, 2014 12:00 am
Ministry of Justice revealed 334 children are currently incarcerated with their convicted mothers in prisons across Turkey. The drama of children forced to stay with their imprisoned mothers hit the headlines this week after Arzu Ceylan Oral, who was convicted in 2008 for her ties with a terrorist organization, appealed to the Turkish Constitutional Court for the postponement of her prison term. Oral, who has a five-month-old baby, will be imprisoned with her daughter if the court rejects her appeal.

Under the current laws, convicted mothers are jailed with their children below the age of six if children do not have a father or any other relative who can provide proper care.

A court had ordered her imprisonment after a lengthy trial that saw her released pending trial. Arzu Ceylan Oral has appealed to authorities to convert her sentence to house arrest instead of prison. The case of Mülkiye Demir Kılınç, another mother who will be sent to prison with her twin infants, also caused public outrage.

In response to opposition lawmakers' questions about convicts with children, Minister of Justice Bekir Bozdağ said 59 children between the ages of three and six were staying at daycare centers during the day and with their mothers in prison at night.