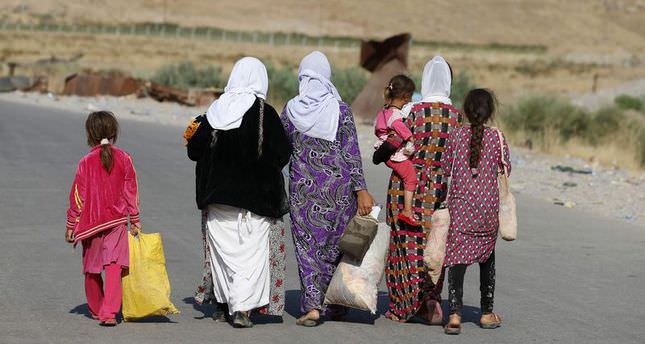 by Daily Sabah Sep 03, 2014 12:00 am
Turkey, which became a major hub for displaced Syrians, now faces another influx of the displaced from Iraq: Yazidis. The country last received 1,500 Yazidis fleeing the violent takeover of their town by the Islamic State of Iraq and al-Sham (ISIS) two days ago.

Walking on foot from Sinjar, their hometown in Iraq, Yazidis managed to reach Turkey located hundreds of kilometers away. Exhausted Yazidis, who scaled mountains, arrived in the Uludere district of the southeastern province of Şırnak where they received food aid from locals before their accommodation to camps in Şırnak and the city of Mardin.

The exact number of Yazidis taking shelter in Turkey in the wake of the brutal ISIS attacks since July is still unknown although Turkish media reports claim 16,000 Iraqis, including Yazidis, have fled to Turkey recently after ISIS advances to northern Iraq.

Hasan İpek, governor of Şırnak, where Turkey's border crossings with Iraq are located, said 2,000 Yazidis took refuge in the province after formally crossing into Turkey while 14,000 others illegally crossed the border. İpek said Turkish authorities dispatched humanitarian aid to Yazidis who fled to Dohuk and Zakho, two cities controlled by the Kurdistan Regional Government (KRG) that provides a safe haven for Yazidis from the south. The governor said both trespassing Yazidis and those with passports were provided accommodation, food and other basic needs in Şırnak and Mardin provinces although limited local resources forced them to accommodate some Yazidis at schools and other buildings instead of tent camps and other accommodation facilities.

The Turkish Prime Ministry's Disaster and Emergency Management Authority (AFAD), the main government agency aiding the displaced in Turkey and the world, is already setting up camps for Yazidis in Zakho and Dohuk. Governor İpek said there were 40,000 Yazidis in Zakho alone and they would have to take shelter in Turkey if they are not handed humanitarian aid in Zakho.

Two KRG towns already host over 700,000 people fleeing ISIS violence.Turkey is already beset with an influx of Syrians fleeing conflict in their country and struggles to help 1.1 million displaced Syrians with limited resources. Authorities are concerned that a new wave of immigration might be too much for the country to handle and look for ways to prevent the crossings into Turkey.