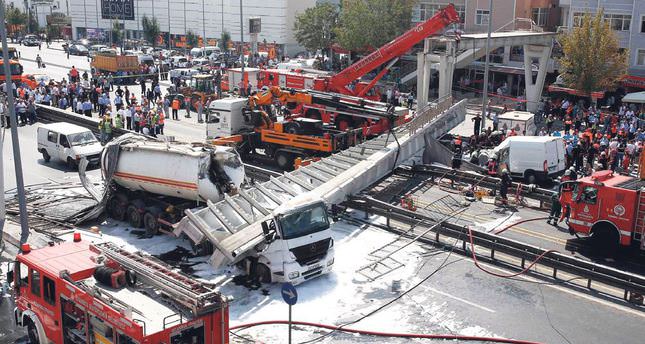 by Daily Sabah Sep 03, 2014 12:00 am
A pedestrian overpass in Avcılar, a district on Istanbul's European side, partially collapsed yesterday after being struck by a truck's raised dump bed. One man was killed and four others were injured in the accident that occurred at around 10:00 a.m.

The truck driver reportedly told police he failed to lower the dump bed as its control panel had a glitch and did not work despite repeatedly pushing the button. Security camera footage showed the dump body raised some 400 meters before the truck smashed into the overpass. The truck was loaded with liquid glucose, and firefighters rushing to the scene covered it in foam to prevent a fire hazard.

A minibus was trapped under the rubble, but rescue crews managed to pull out its occupants.The body of the sole casualty, Yusuf Kara, a textile worker, was recovered from a collapsed part of the overpass.

The scene was meters away from a main station of Istanbul's metrobus route where hundreds of commuters swarm every day. The overpass was located right above the metrobus line that buses in a special lane and packed with passengers use. Eyewitnesses said it was a "miracle" that only one person was killed in the collapse of the overpass that is also situated near a busy shopping mall.

The overpass on Istanbul's E-5 highway connecting the city's west and east blocked traffic for hours. Part of the highway from Avcılar to Topkapı in the east - near the heart of Istanbul's historic peninsula - was closed for hours while metrobus services were suspended.

In 2012, a truck hit another overpass in Avcılar, though it did not collapse. In 2010, a truck with a raised dump bed also struck an overpass in Beylikdüzü, a few kilometers away from the collapsed overpass in Avcılar. In the wake of yesterday's accident, experts urged authorities to replace overpasses with underpasses.

Local NGOs also called on authorities to implement new regulations to restrict permission for heavy trucks in populated areas as well as frequent inspection of those vehicles.