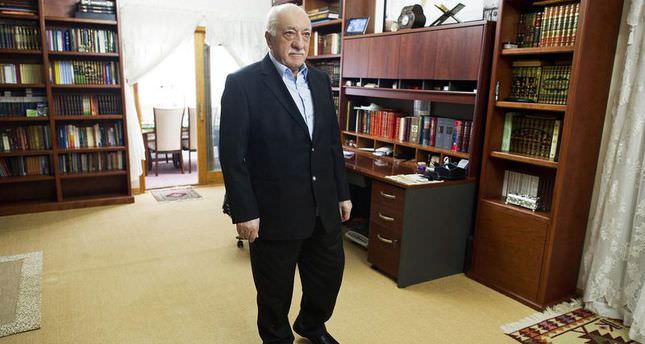 by Daily Sabah Sep 04, 2014 12:00 am
A police officer, who took part in the December 25 operation which aimed to overthrow the Turkish government, confessed that controversial US based imam Fetullah Gülen had ordered the operation, the Turkish newspaper Sabah reported on Thursday.

"Overthrow the government" was the instruction of Gülen, who has been living in a self-imposed exile in Pennsylvania since 1997, the police officer allegedly confessed. Upon Gülen's order, police officers who have infiltrated the mainstream structures forged official documents and conducted illegal wiretappings, Gülenist officer's statement added.

The unnamed police officer made his conffessions to the Istanbul chief prosecutor's office, according to the Sabah newspaper. "It was never explicitly said that Gülen was a messiah, but we understood that he was," was the police officer's statement.

"We were threathened with not getting a promotion had we not stayed in Gülenist houses."

"If the Gülenist police officers had decided to conduct illegal wiretappings, that would have been done. They prepared a scheme that made it seem as if Erdoğan was the head of an organization of fraud and corruption. The police officers followed him to his house and conducted illegal wiretappings and thereby trying to reflect him as if he were a criminal. I think they all did this with an insruction coming from Pennsylvania. They were going to establish a new government of their own choice and imprison Erdoğan and the ministers, had they been successful," the officer reportedly confessed.


"At the final stage, we wiretapped into phone calls of everyone close to the prime minister. The fabricated voice recordings were handed to Prosecutor Muammer Aktaş on December 17," the police officer added.

Turkish government officials have continuously expressed their determination to continue to lawfully fight against the Gülen movement. Erdoğan has accused the US based imam with running a "parellel state" within the state. Erdoğan also accused the movement of being behind a series of recordings posted on the Internet suggesting the prime minister and his family members were engaged in corruption. The Scientific and Technological Research Council of Turkey issued a report on the recordings, stating that the tape recordings posted on social media platforms allegedly belonging to the prime minister and his family, were fabricated by electronically cutting and pasting different syllables from different speeches under a single pool of voice recordings.