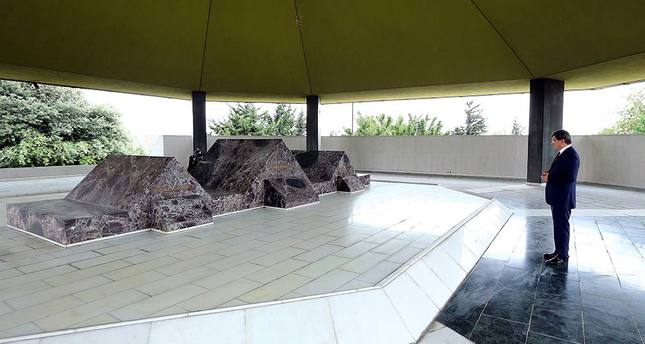 by Daily Sabah Sep 05, 2014 12:00 am
Newly appointed Prime Minister Ahmet Davutoğlu visited the graves of former Turkish Prime Ministers paying a visit of acknowledgement and gratitude for their contributions to the country.

The PM's first stop was to former Prime Minister Adnan Menderes' grave, who governed the country between 1950 and 1960 and was hanged by the military junta after the 1960 coup d'état, followed by a visit to Necmettin Erbakan, PM of Turkey from 1996 to 1997 and finally Turkey's 8th president Turgut Özal's graves on Friday.

Davutoğlu first visited the mausoleum of Menderes after chairing a meeting held in the Justice and Development Party (AK Party) Istanbul headquarters located in the Sütlüce district. The PM prayed alone beside the late Prime Minister Menderes' grave for a while and then headed towards the graves of Özal and Erbakan one after the other.

Davutoğlu was accompanied by the party's Deputy Chairman Ekrem Erdem.