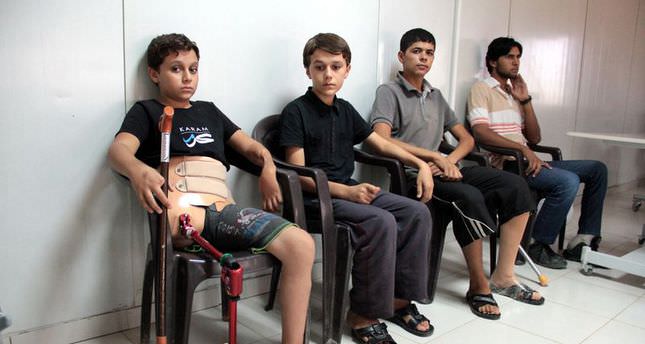 In line with its hospitality for the displaced Syrians, Turkey offers treatment and rehabilitation for children who lost their limbs in four years of conflict in Syria

A clinic and rehabilitation center in the southeastern Turkish province of Malatya helps Syrian children and adults who lost their legs and arms, cling to life through treatment for trauma and fitting of prosthesis.

Situated at a "container city" or a camp for the displaced that is composed of containers converted to houses, the center was set up two months ago by Turkish Prime Ministry's Disaster and Emergency Management Authority (AFAD) and the United Nations Children's Fund (UNICEF).

Nihat Yazıcıoğlu, director of the camp, they prioritizes the treatment of children at the center. He noted that currently 24 Syrians are being treated at the center and they would bring in 208 more wounded Syrians staying in other tent camps and container cities to the center, along with their families. "We expect more children who are in need of prosthetic limbs to be treated here," he said. Yazıcıoğlu said it was "rewarding" to see the smiles of children, "who arrived here either in the arms of their parents or on wheelchair" after they became able to walk.

More than a prosthetic limb, Syrians, especially the young ones, seeks a cure for the mental trauma that the conflict inflicted on them. Lacking an arm or leg, children feel isolated in the community as they try to avoid contact with prying eyes while yearning for a new life.

Ahmed al-Kuraci, 12, lost his right leg in the civil war. He has been living with his family of five in northern Syrian city of Idlib near the Syrian-Turkish border. A bomb fell upon their house while his mother and siblings were reciting Qur'an. Though he survived, the boy lost his entire family and a leg.
He underwent a series of surgeries in Turkey where he was brought and finally became eligible for a prosthetic leg. "I am very happy. This is like having a new body. I had forgotten how to walk and now I will start a new life," he says.

Ahmed al-Ahmar, 6, has been living in the Syrian province of Aleppo. He was out playing with his friends when he heard a warplane roaring past above. He remembers bombs falling on the street and waking up at an Aleppo hospital, without his left leg. The boy now awaits a new, prosthetic leg "to ride bike, walk and run again."

Since the unrest in Syria escalated into all-out civil war that killed thousands, Turkey provides treatment for rebels and civilians injured in clashes with the Assad regime's forces and constant shelling of towns by the regime forces. Turkish hospitals near the border receive injured Syrians almost on a daily basis from Syrian border towns controlled by rebels of Free Syrian Army.

Turkey also mobilizes health services for displaced Syrians in Turkish tent camps and other accommodation facilities such as regular medical check-ups at clinics set up at 10 tent camps.