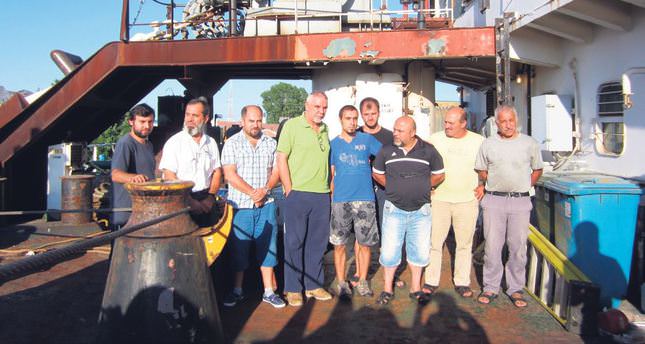 by Sep 09, 2014 12:00 am
Twelve Turkish crew members remain stranded aboard a vessel off the Canadian coast while their families back home await their return.

Sailors were in Port of Sorel-Tracy, Quebec for reparation of a ship owned by a Turkish company back in April. Canadian authorities seized the vessel when the company did not pay $60,000 (TL 131,000) in docking fees and reportedly went bankrupt. Sailors claim they were left penniless as the company did not pay them and they would not leave even if they are provided plane tickets to Turkey unless they are paid their salaries.

Hüseyin Ateş, father of Umut Ateş, one of the sailors onboard "Phoenix Sun," said the company abandoned the sailors after taking care of them only for one month. "My son and his colleagues would sail the ship to Turkey after its reparation in Canada. They signed contracts with the company. But the company left them stranded. Neither we nor those aboard hears from any company officials in three months," he said. Ateş said Canadian charities, labor unions and locals delivered food to the sailors living aboard the vessel but his son and others were "suffering."

"All these sailors were there to make a living for their families and they were not paid for three months. I call on the Turkish authorities to help us and bring our sons home," he said.

The families said the Turkish embassy in Canada delivered aid to sailors and offered them free tickets to Turkey but the sailors refused to return without being paid by the company.