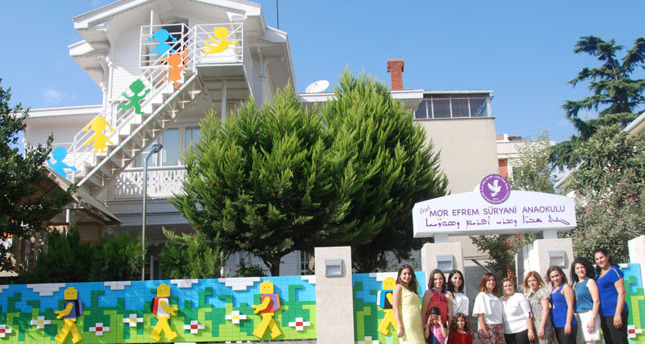 by AA Sep 10, 2014 12:00 am
Thousands of Istanbul children return to school next but for one very special group the new term promises something special.

The Mor Efrem nursery in Yeşilköy will ring to the sound of the ancient Assyrian language as this Christian minority opens their first school in Turkey for almost 90 years.

At least 20 Assyrian children are expected to start their education at Mor Efrem, reviving a tradition of education stretching back to when the country's last Assyrian school in the southeastern city of Mardin closed 86 years ago.

The nursery's youthful principal, Meri Belbak, 26, tells Anadolu Agency: "We've been longing to teach our culture and language by opening a school in Turkey for years. We are now waiting excitedly for opening of the school term on 15th September."

Belbak is Assyrian but does not speak the tongue: "Together with the children, I will also learn our ancient language here," she adds. "Our desire is to have many children here and to give them a good education."

Assyrians are an ethnic group, whose origins lie in ancient northern Mesopotamia. Their language Assyrian-an Aramaic tongue-is one of the oldest in the world, with a history stretching back 5,500 years.

The mixed school-which has a 60 student-capacity-is now waiting now for final approval from the general directorate of private training institutes. After receiving the go-ahead, which is expected to come by Friday, school officials will start the new term with around 15-20 students in the first intake.

Assyrians, unlike Armenians, Jews and Greeks in Turkey were not officially accepted as a minority' and were not able to benefit from minority rights, such as establishing their own school.

The community applied to an Ankara court in 2012 for permission to open their own schools. The court ruled that Assyrians should be accepted as a minority on the basis of Lausanne Treaty which defined the borders of modern Turkey in 1923. A legal ruling in June 2013 opened the way for Assyrians to open schools.

After getting the go-ahead, the Virgin Mary Assyrian Church Foundation rented a three-storey building in Yeşilköy, renovated it to make it child-friendly and hired a staff of seven teachers-all Assyrians-with three support personnel.

Jenny Değirmenci, 31, is one of the teachers at the nursery. Excited by the opening she says: "We are the first teachers at this school; I am very proud of this. I will teach children Assyrian and English here."

Jenny, a mother of two, was born in Istanbul but her family hails from near Mardin, where many Assyrians live.

"My family was speaking Assyrian among themselves when I was a child. My first introduction to the language was like that. Then, in order to improve my language, I went to a church to take Assyrian classes for 13 years," she says.

In the absence of their own schools since 1928, Assyrians have relied on family and their church to learn their language.

The community opened a school, giving Assyrian, Arabic and Ottoman Turkish classes in Mardin in 1799 but had to close it in 1928 because of financial problems related to a decreasing population because of emigration to North America, the Caucasus region, Australia and Europe.

Community groups say there are 26,000 Assyrians now living in Turkey. The majority (around 20,000 Assyrians) live in Istanbul, while the others reside in the eastern Turkish cities of Adıyaman, Diyarbakır, Elazığ and Mardin.

For the teaching staff, the new venture is a combination of personal and professional pride. Ebru Ölmez, 28, another educator at the school says: "Not only as teachers, but also as a member of the Assyrian community, we are very happy and proud of being here. It is very good step for the future of our culture and language."

"I was working for another school earlier but when I heard that an Assyrian school will open, I've immediately decided to come here," she adds.

Although the new school term has not begun, there are already some children enjoying the nursery together with their families. Mothers and fathers arrive to get more information about the school in order to enroll their children.

"I've toured the building and liked it very much," says Irem Gurdan, 33, a mother of two.

"It is very beautiful and reassuring that teachers here are all from our community and will teach our culture. For example, I am sure my little boy will experience a real Christmas here and will learn our own culture closer," she adds.

Kenan Gurdal, deputy director of Virgin Mary Assyrian Church Foundation says: "We've received very positive reactions all over the world. Assyrians living across the world could not even imagine establishing a school in Turkey before."

Gurdal praises the government's efforts for minorities: "Establishing a school is not just our success; it is also the Turkish government's. [President Recep Tayyip] Erdoğan has always supported the rights of minorities so far," he adds.

"Our next aim is to open elementary and high school."

Assyrians are also waiting to open their own church in Istanbul. In 2012, the Istanbul Metropolitan Municipality granted a plot in Yeşilköy to open an Assyrian church. "It will be the first Assyrian church after the Republic. We are waiting for approval from Council of Monuments right now," says Gurdal.

But for now the first steps will be taken by the small children of Mor Efrem. Named after the great fourth-century Syriac poet-saint, the nursery promises new beginnings for an old culture.