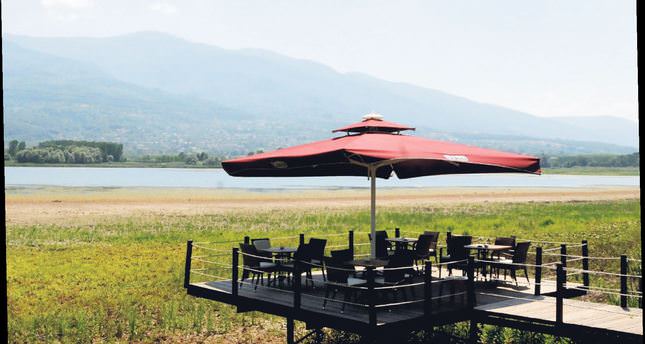 by Daily Sabah Sep 10, 2014 12:00 am
Lake Sapanca, one of the major water sources for the northwestern Turkish cities of Sakarya and Kocaeli, is under threat of declining water levels due to a drought bearing down on the country.

Lack of rainfall, excessive water consumption and illegal agricultural usage already brought the water levels in the lake to a critical point. Pinning their hopes on the precipitation, locals were frustrated when the heavy rainfall earlier this week did not do much to increase the water levels. Despite 67 kilograms of rainfall per square meters, the water level only rose a centimeter.

Yet, experts cite that the rainfall was well absorbed by the soil, and upcoming rainfalls would better contribute to a rise in the water levels in the lake. Sapanca, which is also a popular getaway for Istanbulites, saw its water levels drop to the lowest point in recent history, with tiny islets underneath re-emerging. The lake provides an average of 120 million cubic meters of water annually for consumption, but it dropped to 84 million cubic meters for this year.

The lake is supposed to provide 664,000 cubic meters of water daily for Sakarya and Kocaeli. However, factories in Kocaeli, Turkey's major industrial hub, also benefit from the lake's waters by transporting it via pumps for industrial use.