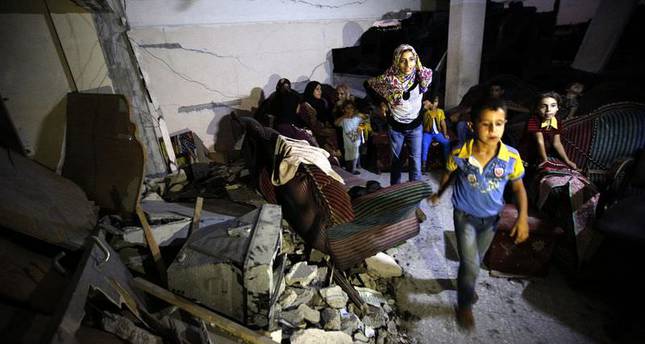 by Daily Sabah Sep 10, 2014 12:00 am
The aid campaign orchestrated by the Prime Ministry for Gazans whose living conditions were heavily affected by Israel's recent military onslaught on the Gaza Strip, ended with donations of approximately $56 million (TL 123.2 million).

The aid campaign that started on July 18 by the Prime Ministry for Gazans ended last Friday. Within the scope of the campaign, which was coordinated by the Directorate of Religious Affairs and the Turkish Cooperation and Coordination Agency (TİKA), TL 55.9 million in donations were given in Turkish lira.

Initiated to aid Gazans suffering from a lack of shelter, healthcare and food after Israel's military operation, people donated money in liras, U.S. dollars, euros and British pounds via SMS in the campaign.

Both businesses and individuals were able to donate directly to the campaign's bank accounts without paying a transfer fee. It was also possible to donate TL 5 by texting "GAZZE" to 2851.

Since the Israeli government's offensive started, Turkey's humanitarian aid to Gazans and initiatives to bring the injured to Turkey for treatment has continued. Around 80 Gazans injured during the 51-day offensive have been transferred to Turkish hospitals since the beginning of August. Along with the Turkish Red Crescent, TİKA, the Prime Ministry's Disaster and Emergency Management Directorate (AFAD) and NGOs have been delivering humanitarian aid to Gaza.

Furthermore, a Turkish power-generating ship is due to sail to the Gaza Strip in the next 120 days if the necessary permits for crew members are completed on time, according to a Turkish shipbuilding company chairman.

The Egypt-brokered cease-fire went into effect on Aug. 26, ending the 51-day Israeli operation, which saw 2,143 Palestinians killed and over 10,000 injured – the vast majority of them civilians.