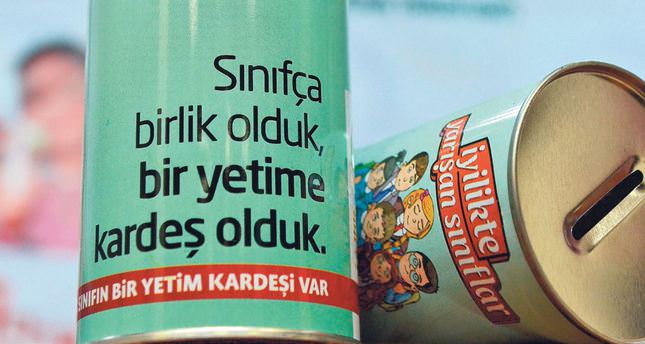 by Daily Sabah Sep 10, 2014 12:00 am
A Turkish charity along with the Ministry of National Education launched a project to encourage Turkish students to communicate with and help orphaned children in Turkey and abroad.

The project is entitled "Every Class Has An Orphan Brother / Sister," and each classroom in primary and high schools across Turkey will sponsor an orphan under the project. The Humanitarian Aid Foundation (IHH), which coordinates the sponsorship of orphans and students in each classroom, collects TL 90 ($40) per month for at least one year. The charity provides the name and address of each orphan to students so they can engage in correspondence.

The charity acts as a bridge between students and orphans from Turkey and 42 countries where conflicts and disasters left many orphaned such as the Palestinian territories and Somalia. The project, launched in 2013, reached out to 7,000 orphans in 2014.

IHH officials said there are more than 600,000 orphans in Syria where four years of civil war killed thousands, while the number is 5 million in Iraq and over 3 million in Afghanistan, two countries that have been embattled with conflicts throughout the past decade.