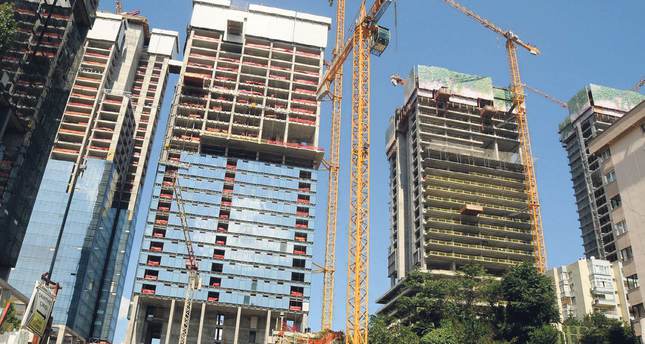 Four people were arrested on charges of involuntary manslaughter of more than one person yesterday after 10 workers were killed at a construction site in Istanbul last weekend. The four in question are construction site foreman Önder Türksoy and elevator technicians Adem Akyıldız, Turgay Dalkılıç and Murat Aytimur.

They were among the six people arrested in the wake of Saturday's accident in Istanbul's Mecidiyeköy district. Orhan Demirel, a senior executive of the company that manufactured the elevator and Metin Karakoç, a high-ranking executive of the construction company, were released though they were banned from leaving the country under probation laws.

Ten workers plunged to their death on Saturday evening when an elevator in an unfinished housing block crashed to the ground from the 32nd floor.
Officials from the construction company and its subcontractors, as well as the elevator manufacturer, denied any negligence and/ or responsibility in the operation of elevator.

The tragic accident sparked a debate over work safety in Turkey's fast-growing construction sector. Statistics show that 1,754 workers were killed in the past five years at construction sites and another 1,940 were rendered disabled in 35,846 accidents.

The elevator was still in use depsite some workers claiming the elevator was suffering from a series of technical problems. A criminal and administrative inquiry into the accident continues.

Turkish media reported that inspectors from the Ministry of Labor and Social Security found evidence of negligence in their initial inquiry. Inspectors detected that the elevator lacked certain safety measures such as a mechanism slowing down the elevator in the case of a crash. It did not have equipment that would soften the landing as well, according to inspectors who noted that the elevator was operated by "inexperienced" workers.
Quoting Mehmet Tezel, one of the inspectors, the media reported that the construction company was entirely at fault for the accident as it "focused on construction rather than human safety." Inspectors also claimed the elevator was "overloaded" at the time of the accident.

The Turkish government readied an action plan to tackle workplace accidents. Although the country has regulations in place to ensure work safety, accidents still claim lives. Officials say regulations are "more clear" than an in the International Labor Organization (ILO) agreement, which critics have called on Turkey to implement, and they are meticulous in risk assessment and inspection regarding dangerous sectors such as construction and mining.

Prime Minister Ahmet Davutoğlu had ordered a detailed investigation into the accident and the ministers decided on further measures against the accidents in an ensuing cabinet meeting. Under the government's plan, all elements of a building's construction, from elevators to scaffolding, from electricity to building material, will be brought in line with ILO criteria.