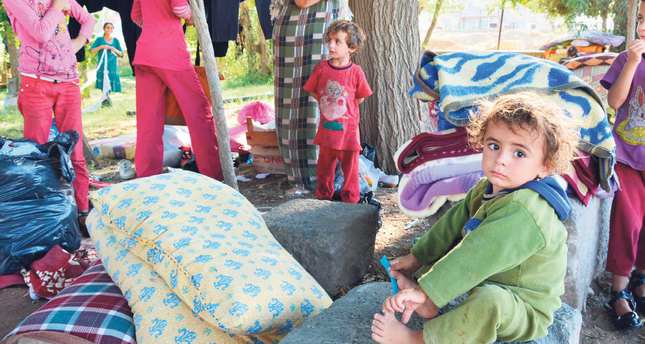 by Daily Sabah Sep 11, 2014 12:00 am
A group of nongovernmental organizations in the south east of Turkey believe that around 100,000 Iraqi Yazidis are expected to travel into the country in the near future, fleeing from the Islamic State of Iraq and al-Sham (ISIS).

Burç Baysal, chairman of Diyarbakır Industrialists and Businessmen Association (DİSİAD), held a press conference in the province of Diyarbakır and announced a report about the plight of the Yazidis, which was prepared by DİSİAD and other nongovernmental organizations. Baysal said representatives of NGOs traveled to Northern Iraq, controlled by the Kurdistan Regional Government (KRG) where Iraqi Yazidis have fled to following ISIS violence, for the report, and presented their findings to the Ministry of Interior and the Ministry of Health. "A campaign of massacre led to the displacement of some 450,000 Yazidis. Most of them took shelter in Kurdish-controlled areas and they live in squalor in various cities across Northern Iraq. Moreover, tens of thousands of Yazidis are en route to Iraq's borders to leave the country. We believe that Turkey will have to host over 100,000 Yazidis in the near future," Baysal said.

He stated that it was important to provide good conditions in terms of health, education and rehabilitation to the displaced Yazidis in Turkey and coordinated efforts were needed to fast-track their accommodation due to the approaching winter. Baysal said DİSİAD and other NGOs called on the authorities to address the needs of Yazidis and to contribute to efforts "to maintain a peaceful atmosphere in Iraq for their return home as soon as possible." NGOs also called on the public to provide humanitarian aid to Iraqi Yazidis.
Turkey has already set up a camp for Yazidis in southeastern Turkey and is currently building two others in Northern Iraq to curb the flow of the displaced as it already faces a growing influx of the displaced from neighboring Syria.

The exact number of Yazidis traveling to Turkey is not known as some illegally cross the border but it is estimated that approximately 10,000 Yazidis crossed into the country, many of them accommodated in predominantly Yazidi villages in the southeastern Turkey.