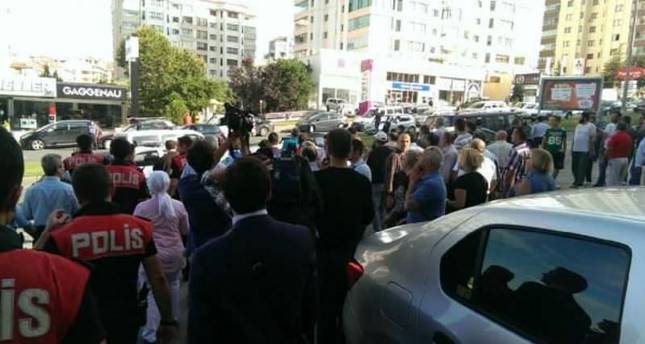 by Daily Sabah Sep 12, 2014 12:00 am
Officials from the Kuwaiti Embassy in Ankara were summoned to the Foreign Ministry after Thursday's alleged beating of a Turkish Air Force pilot by embassy officials. A diplomat reportedly involved in the brawl may be deported as "persona non grata" if found guilty.

The Foreign Ministry released a statement on Friday saying officials from the Kuwaiti Embassy were summoned to "explain the incident." The statement said that since Ambassador Abdullah Abdulaziz al-Duwaik was out of town, the embassy staff was questioned on his behalf. The statement said that the police and judiciary launched a comprehensive investigation into the incident and that the ministry would take "appropriate action in line with the conclusion of the inquiry."

Lt. Col. Hakan Karakuş, son-in-law of Turkish Air Forces Commander Gen. Akın Öztürk, was driving his wife and baby to a hospital in Ankara's Çankaya district when his car was overtaken by a Kuwaiti diplomat's car. A brawl erupted between Karakuş and embassy officials, and the pilot, who was in Turkey on temporary leave from a NATO mission abroad, was beaten. The pilot was hospitalized with injuries to the head.
Eyewitnesses have claimed four men stepped out of the Kuwaiti embassy car in which Emad Al-Mohaid, an embassy attaché, was travelling, and started beating up Karakuş. Embassy staff took shelter in the offices of a nearby bank after an angry crowd confronted them. Karakuş, whose face was drenched in blood, was taken to a military hospital while the embassy staff, including al-Mohaid, was taken to a police station for questioning. Karakuş filed a criminal complaint following the incident.

Turkish Armed Forces also issued a statement that condemned the "heinous" attack on Karakuş. The statement included a thank-you to locals intervening in the brawl.

On the other hand, Kuwaiti Ambassador al-Duwaik claimed his staff did not "beat up" Karakuş. He said the pilot got out of his car and insulted embassy officials, while the officials remained "silent."

"Our diplomat did not do anything, but the person in the other car (Hakan Karakuş) kicked the embassy car. We have evidence," he said in a statement. The ambassador did not elaborate as to the evidence; neither did he explain how Karakuş was injured. Security camera footage shows the incident, although from a distance, and the occupants of the Kuwaiti diplomat's car are shown engaged in a quarrel with Karakuş and hitting him while the man falls to the ground.

The ambassador said he would accept blame if the Kuwaiti diplomat hit Karakuş. He also claimed there were only two people inside the embassy car -- the driver and the diplomat.

Some eyewitnesses had claimed that al-Mohaid told the intervening crowd to stay away and that he had diplomatic immunity. Although diplomatic immunity from arrest is granted to representatives of foreign countries, they may be declared persona non grata by the host country if they are involved in a serious crime and may be subsequently deported and banned from traveling to the host country again. Turkish media reported that if the involvement of the Kuwaiti diplomat in the brawl case is proven, the Foreign Ministry would suggest that Kuwaiti authorities reassign or dismiss the diplomat rather than declaring him persona non grata so as not to harm relations.

Turkey and Kuwait maintain good relations that have flourished in the past decade, especially in terms of Kuwaiti investment in Turkey and bilateral trade. It is not clear yet whether the incident that involved a relative of one of the Turkish army's top commanders and a Kuwaiti diplomat would have repercussions in relations.