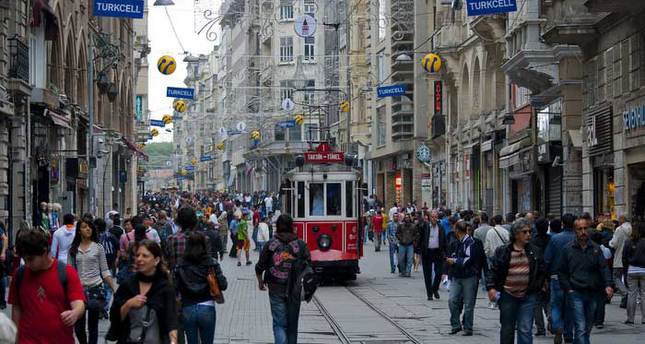 by Daily Sabah with AA Sep 13, 2014 12:00 am
Istanbul's prominent İstiklal Avenue, the heart of culture, art, and entertainment, was the scene of an unusual protest on Saturday as civil rights demonstrators marched backwards to mark the 34th anniversary of Turkey's 1980 military coup.

Around 100 activists gathered on İstiklal where, after briefly addressing journalists, they took 500 backwards steps towards Taksim Square.

The unique protest was to highlight the setback caused by military intervention, in which hundreds of opponents were killed and thousands jailed and tortured.

The protestors from various youth movements and associations also emphasized the negative impact the junta's 1982 constitution still has on freedom of expression and civil rights in modern Turkey.

Mehmet Özkaya, a protestor from the association of 'Inspectors of Democracy' pointed to the 2010 referendum that saw voters call for an overhaul of laws dating from the military period. "The amendments that we had dreamed of were forgotten even after a year," he said.

The coup plotter and a former president Kenan Evren, 97, was sentenced to life prison this year, along with fellow general Tahsin Şahinkaya.