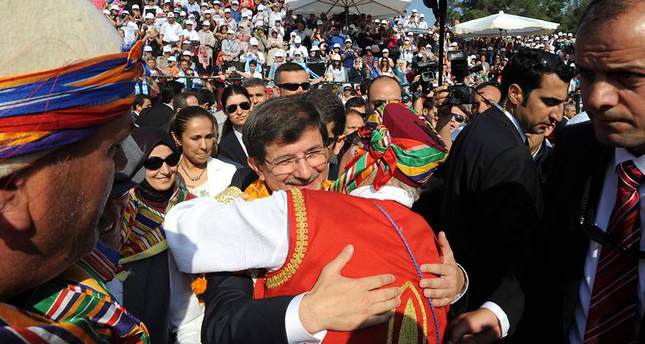 by Daily Sabah Sep 14, 2014 12:00 am
Celebrations commemorating the 733rd anniversary of the death of Ertuğrul Gazi, the father of Osman I who founded the Ottoman Empire, as well as the Söğüt Yörük Festival, were held in Söğüt, a town in Bilecik province, from where the Ottoman Empire is believed to have emerged.

Speaking at the celebrations held in Bilecik's Söğüt district on Sunday, Prime Minister Ahmet Davutoğlu said that his government is determined to complete a restoration projected to build a "historical basin" around Bursa, İzmir and Yenişehir, the towns where the Ottoman Empire was found.

Describing Söğüt as a sacred place where Turks go to meet their past, Davutoğlu said, "Today we commemorate our ancestors with many of our brothers who came from all around the country to join us here in Söğüt. Once again, we vow in the presence of Ertuğrul Gazi that this soil will eternally be our homeland," adding that he and the Bilecik mufti had agreed to hold a Quran recitation next to the graves of Ertuğrul Gazi and Şeyh Edebali every Friday from morning until the Friday prayer at noon.