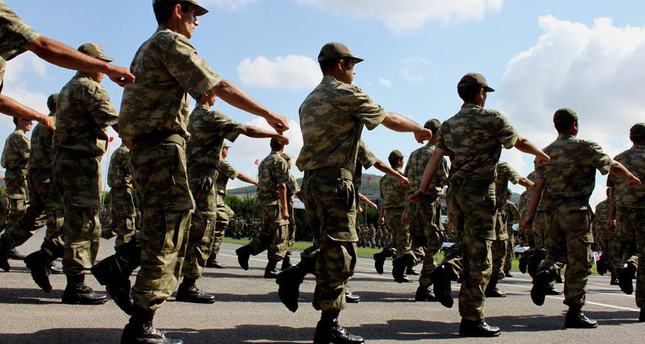 by Daily Sabah Sep 14, 2014 12:00 am
A paid military service regulation will reportedly be part of the upcoming omnibus bill that is set to cover military issues contrary to expectations that it would be released in a separate bill, media reported on Sunday.

Contrary to expectations it would be part of a separate bill, work on the paid military regulation has been conducted by the Prime Ministry for a year and will reportedly be included in the "military omnibus bill," which is expected to be submitted to Parliament in October.

Regulations pertaining to military judges, military discipline and noncommissioned officers' personal rights are expected in the upcoming omnibus bill, besides paid military service. It is as yet unclear whether a regulation regarding coup victims expelled from the military will be present in the bill.

There are reportedly 800, 000 people awaiting paid military service. Whether the age limit only allows men over 29 to be exempt from military service in the previous bill will be reduced is still a topic of debate. Reportedly, men strongly demand that the age limit be decreased to 25. The requirement to pay TL 30, 000 ($13,600) for exemption from the service was also considered to be too high by many and a change concerning the amount of the payment is also expected. Whether the price will be reduced is also currently being discussed.

The bill is likely to open the way for payment to be accepted in lieu of military service in a bid to address the demands of an estimated 500,000 men over the age of 25 who haven't yet completed their compulsory military service. If the regulation takes effect, TL 10 billion is expected to go into the state treasury.