Building a house of clay, tires with some help from friends 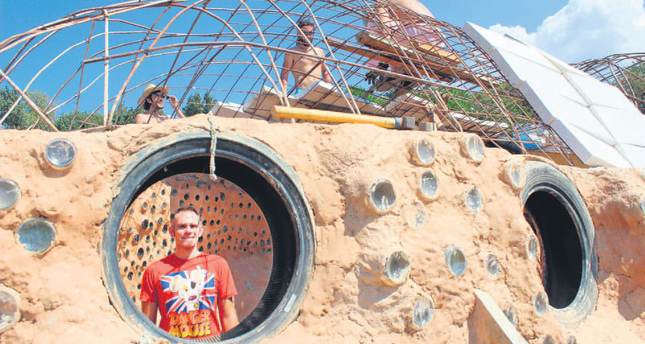 by AA Sep 15, 2014 12:00 am
Businessman Erdem Köksal, who says he was inspired by Michael Reynolds's "Earthship" project, is building an environmentally sustainable house near İzmir. Köksal, who was involved in the tourism sector, moved to the Aegean city of İzmir with his family to fulfill his dream, purchased land in a village near the city center and then collected 450 used tires.

Köksal said the tires were filled with soil and then after a 20 minute heating process became suitable to be used as insulated bricks. He then used plenty of glass bottles in order to allow some sunlight into the house. He also salvaged wood from old ships dismantled at the Aliağa Ship Yard to be used as doors and window frames.

The laborers were volunteers who responded to a message he posted on an Internet site. Around 50 people, mostly foreign nationals, worked around the clock, in exchange for room and board.

The house, being built from clay and recycled materials, is expected to be completed midway through the coming year. Köksal said his goal was to fully utilize rainwater and sunlight. The family's water needs will be met through rainwater and a well dug nearby. Wastewater will be used for vegetable gardens. "This house will be a first in Turkey.

Experts also told me that the house will be earthquake-resistant. My aim is not to pollute the environment anymore. I also want this house to set an example for others to follow," he said.

Villagers who listened to his plans incredulously at first are now giving their full support, said Köksal, adding that, "Some are building garden walls with tires. Some even collect bottles for me."

One of the volunteer builders, lawyer Tamer Kardeş, said he wanted to help as soon as he heard of Köksal's environmentally conscious plan. "Environmentally friendly living is not expensive. We can build new lives. This project is something that brings together people who want to put a stop to our unsustainable lives," he said. British national Liam Handly said after helping Köksal he had traveled across Turkey for two and a half months. Handly said, "I then came back to help out a bit more on Köksal's 'Erdship.'"
Last Update: Sep 15, 2014 1:39 am
RELATED TOPICS