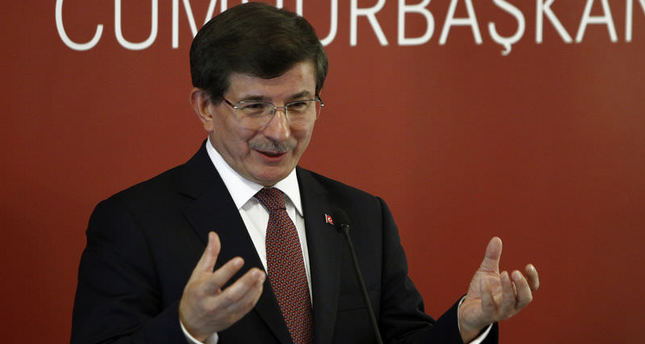 by Daily Sabah Sep 16, 2014 12:00 am
Turkish PM Ahmet Davutoğlu called on the PM of Greece, Antonis Samaras, to work together to set a peacemaking example in Cyprus, at a press conference held in the Turkish Republic of Northern Cyprus (TRNC) on Tuesday.

Davutoğlu called on Samaras by saying, "Come to Cyprus, let us build peace all together."

Cyprus has been divided into a Turkish north and an internationally recognized Greek south since 1974. Talks between the Turkish and Greek Cypriot leaders and efforts to reunite the island have so far failed.

Davutoğlu said, "If the prime minister of Greece is ready, let us first visit South (Cyprus), drink tea there, and converse. Later, we will come back to North (Cyprus) and accompany each other."

"The Mediterranean has been the center of many cultures, the mutual sea of many folks."

Referring to the sixty-ninth session of the United Nations General Assembly which opens on 16 September, Davutoğlu said, "Bring in that assembly both parties together, if necessary hold them in one room for days. But, let peace and stability come to the island and the East Mediterranean."

Turkey wishes that all the parties –Turkey, Greece, TRNC, and Southern Cyprus– sit at the same table and think thoroughly on how to make the East Mediterranean a peace basin, Davutoğlu said. Turkey showed its will to actualize this, but it could not find an adequate return from the other parties, according to Davutoğlu.

Following many rounds of negotiations in over 40 years, the former U.N. Secretary General Kofi Annan had presented a plan – the Annan Plan – for the solution to the Cyprus issue. The proposal was however rejected by Greek Cypriots through a referendum in 2004, although it was overwhelmingly approved by the Turkish Cypriots. Calling on the President of Cyprus, Nicos Anastasiades, Davutoğlu said, "Let us establish this peace as soon as possible, not tomorrow, but today, not next week, but this week, not next year, but this year." Every reconciliation process that is delayed deepens the deadlock, Davutoğlu said.

Turkey is planning to pump water to northern Cyprus with the help of an 80-kilometer pipeline running under the Mediterranean Sea at a depth of 250 meters. The immediate aim of the plan is to provide water for the Turkish sector of Cyprus, and later to other countries in the Middle East. The abundance of drinking water in the north will help the Turkish Cypriots with their bargaining power in any unity talks in the future, according to experts.

Davutoğlu said, "No one can stop us from bringing Anatolian mainland's water to TRNC."