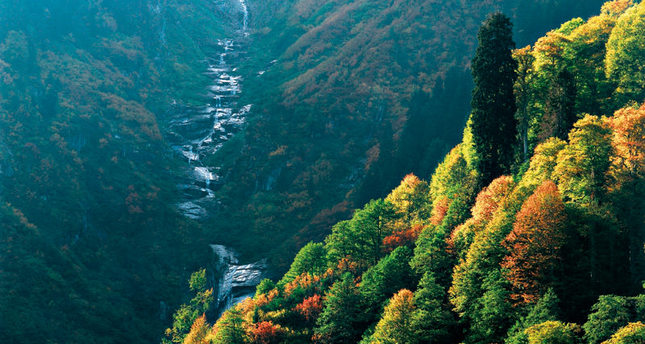 In an effort to preserve Turkey's forests billions of trees were planted, increasing its forest coverage by 27 percent

Soil is one of the most valuable natural resources, and the main reason for wars across the globe. However, desertification reduces the fertility of soil, spoils vegetation and lowers food production. With the participation of international experts, the second Drought and Desertification Symposium is being held in Konya until tomorrow. The three-day event hosts 33 experts from 17 countries, mostly from Africa. The symposium focuses on drought and combatting soil erosion. Governor Muammer Erol, AK Party Konya deputy Mustafa Kaçakcı and Massima Candelari of the UN Secretariat for Combatting Soil Erosion participated in the conference along with others.

Taking the floor during the symposium, General Directorate of Forestry head İsmail Üzmez said that when talking about drought in Turkey, Konya and the district of Karapınar come to mind. The directorate has worked to protect forests for 175 years. The institution's main agenda includes protecting vegetation, combatting and controlling soil erosion, afforestation, pasture improvement and irrigation.

The directorate kicked off an afforestation movement from 2008 to 2013 under the commission of President Recep Tayyip Erdoğan, who was the then prime minister. An area extending 2.42 million hectares was underplanted with 2 billion saplings. Following this, Turkey's Ministry of Forestry carried out three projects, one of which was an action plan to combat soil erosion. Presently, feasibility studies started on an area of 1.40 million hectares. The action plan will reportedly be implemented from 2013 to 2017.

Similarly, the second project will focus on afforestation around dams. The action plan intends to plant trees around 400 dams and ponds, which will also extend their service life. The third project is named "Flood Control Action Plan on Upper Basins." The project was prepared by Turkey's General Directorate of Combating Desertification and Erosion (ÇEM) and is now implemented by the General Directorate of Forestry. It covers 227 basins spreading across more than 4 million hectares.

Since 1946, an area of 7.63 million hectares was afforested, and more than 7 billion saplings were planted. Half of this area was afforested for the last 11 years during which 3 billion saplings were planted. From 2002 to 2014, Turkey's forestland increased about 900,000 hectares. "If you read newspapers, you may see forests and green areas diminish and drought becomes more serious. However, 27 percent of the country is covered with forests. By 2023, the directorate aims to reach 30 percent," Üzmez said.

ÇEM General Manager Hanifi Avcı stated 70 percent of Turkey's soil is prone to desertification due to climate conditions. Considering the country's soil structure, however, Avcı said 90 percent of the land is prone to drought. "If we do not efficiently use our water resources, they might turn into a disadvantage. We can combat desertification if we use irrigation systems for plants, not soil," he continued. Desertification poses a big risk for food security as well. Avcı concluded people residing in drought cities have to migrate to other cities.
Last Update: Sep 17, 2014 1:51 pm
RELATED TOPICS