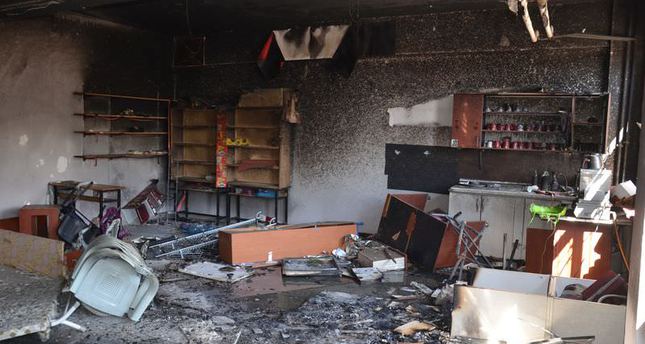 by Daily Sabah Sep 17, 2014 12:00 am
Supporters of the terrorist organization PKK torched seven schools in southeastern Turkey after authorities shut down unlicensed Kurdish schools in the region.

The PKK supporters attacked schools on Tuesday night in the southeastern provinces of Hakkari and Şırnak, a day after authorities closed down three unauthorized schools opened by PKK affiliates.

In the Yüksekova district of Hakkari, where one of the closed Kurdish-language schools was located, four grade schools came under fire by the supporters of the PKK. A group of assailants tossed Molotov cocktails on schools during the night while masked rioters smashed windows of other schools in the district, leaving the attacked state-run schools heavily damaged.

In Cizre, a district of Şırnak where another closed school was located, the PKK supporters poured gasoline on three schools and set them on fire with Molotov cocktails. The assailants also blocked firefighters attempting to put out fires. Security forces intervened to the crowd who hurled stones and Molotov cocktails at them. After brief clashes, the crowd of rioters were dispersed by riot police firing tear gas and water cannons on the crowd.

The terrorist organization, which claims to fight for Kurdish autonomy in southeastern Turkey, has long been a proponent of Kurdish-language schools without the approval of the Turkish state. Opening a private school with a Kurdish curriculum is not prohibited in Turkey, though it is subject to official approval like the opening of any private school in the country. The nongovernmental organizations and the opposition parties that spearheaded the efforts for the opening of the schools did not formally apply for the necessary government certifications according to authorities.

Pro-PKK groups in the region had opposed the closure of schools by authorities on Monday and Tuesday. A group of protesters including Zübeyde Zümrüt, co-chairperson of the Peace and Democracy Party (BDP) for Diyarbakır, removed the official seal of closure in one of the schools in Diyarbakır province on Tuesday and reopened the school for education. Turkish police later shut down the school again on Tuesday after dispersing the crowd gathered at the school to protest the closure.

Speaking in an interview to a Turkish TV channel, Interior Minister Efkan Ala said opening a Kurdish school required owners and operators to follow the proper procedure for opening a private school. "You can't open a school, be it teaching Turkish or Kurdish, without permission from the authorities. This purely aims to spark a debate, to deal a blow to the reconciliation process," Ala said. He was referring to the process that the government initiated to restore the rights of the Kurdish community and end the PKK's violent campaign. Emphasizing that opening a Kurdish school was not prohibited, Ala said the government has taken steps to end the problems Kurds face, adding, "You couldn't even sing in Kurdish freely in the past. Now, we have a public TV station broadcasting in Kurdish."

Proponents of unauthorized schools, on the other hand, vowed to continue their efforts. Gültan Kışanak, mayor of Diyarbakır from the Peace and Democracy Party (BDP), said the opening of Kurdish schools was at the discretion of the public and her administration would support the schools.