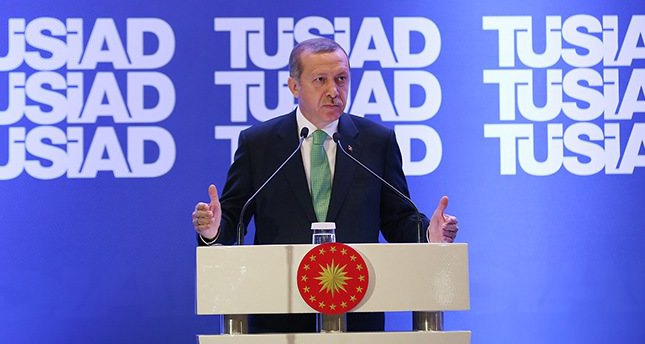 by Daily Sabah Sep 18, 2014 12:00 am
Turkish Industry and Business Association (TÜSİAD) held its second High Advisory Board of 2014 on Thursday in Istanbul, attended by President Recep Tayyip Erdoğan, first time after 3.5 years, and leading TÜSİAD members.

President Erdoğan made a speech at the Board regarding Turkey's current economic outlook and political debates, stressing that between 2003-2014 the most important part of the Turkish government's agenda was the economy, and the overall growth rate between 2003-2013 was 5 percent, and this year it is hoped that it would exceed 3 percent.

Erdoğan said that whenever Turkey started to develop, a coup was plotted and crises emerged due to the system previously established, and noted that 17 and 25 December operations were conducted by the Gülen movement in an effort to revive the old system.

Crises similar to Turkey's Gezi have been implemented in Egypt, Ukraine and Syria and the results are obvious, Erdoğan said. During his term, Erdoğan pointed out, 3 billion trees were planted to recover the forests, and the main aim behind Gezi protests was not environmentalism.

Answering to the cautionary letter written by CHP leader Kemal Kılıçdaroğlu addressing PM Ahmet Davutoğlu regarding the banking system, Erdoğan said that there is only one bank being the Bank Asya, affiliated with the Gülen movement, that has serious problems and is already bankrupt.

Regarding current debate with US newspaper NYT, Erdoğan said Turkey will continue to advance despite falsified information spread by media outlets such as NYT.

President Erdoğan said that the reputation of the media outlets and credit rating agencies had been damaged rather than Turkey's.

Pointing out to the turmoil in the Middle East, Erdoğan said the business world should not be discouraged by the crisis within the region.

President Erdoğan stated that Turkey should not spend its efforts on polarization, but it should aim for a strong Turkey, and added "It is not the time to show fists, it is time to shake hands and aim for new Turkey's vision".

TÜSİAD's chairman Haluk Dinçer made a speech at the Board and stressed that TÜSİAD tries to maintain close relations and exchange ideas with the government regardless of party affiliation, referring to tense relations among some influential TÜSİAD members and AK Party government.

Dinçer stressed the need for an advanced global cooperation model to achieve global stability and overcome existing problems of global financial crisis of 2007.

According to Chairman Dinçer, the new era of globalization centers basic rights and freedoms, liberal governments, civilian organization of the societies and individuals, and current political turmoil is attached to this need for change rather than sectarian, national or financial conflicts.

It is not an easy task for Turkey to integrate with the world and continue its welfare and development polices, while the geostrategic area around Turkey is in turmoil, Dinçer said.

Dinçer reminded that Turkey will host G-20 forum in 2015 and it would be a great opportunity for Turkey to increase its reputation and to end global political turmoil.

Stressing their expectation for the 62nd government to carry out its program effectively, Dinçer stated the current level of national education is not satisfactory enough to carry Turkey to its economic and social goals.

Dinçer pointed out that the manufacturing industry is the leading power for sustainable growth, and industries' share in overall economy dropped in the last 15 years against services and construction.

Macroeconomic stability is the most important success of the last ten years, Dinçer said, and latest rumors regarding Turkey's banking sector should effectively be resolved.

Dinçer also pointed out the need for legal reform and new constitution, and the opposition parties should be involved in reconciliation process.