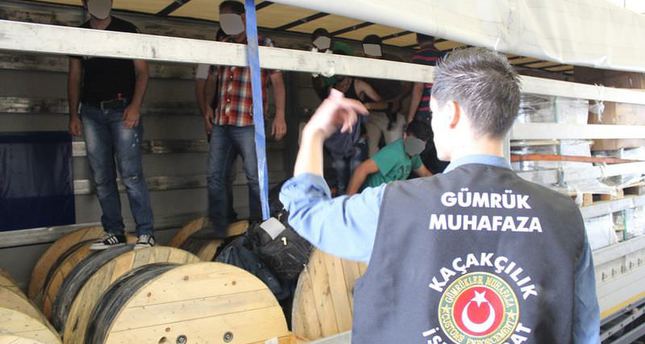 Col. Yavuz Geçim, Coast Guard commander for the Marmara Sea, Bosporus and Çanakkale (Dardanelles) Straits, told reporters that Turkey became a hub for illegal immigration due to its efforts to raise its profile as a regional power and its growth.

He said that the operations for illegal immigrants, their accommodation and other expenses cost the Coast Guard 3 million euros (TL 8.6 million) every month, adding that they are concerned about a drastic rise in the number of illegal immigrants attempting to cross into Europe via Turkey.

Geçim said trafficking of illegal immigrants has become a widespread phenomenon, adding, "the conflict in Syria and other developments that contributed to the displacement of masses has increasingly turned Turkey into a transit country for illegal immigrants. Our country became a popular destination because of its efforts to increase its regional influence and a rise in its economic growth."

Geçim said the number of illegal immigrants attempting to sail the Aegean Sea in western Turkey would be between 10,000 and 12,000 this year according to their projections, adding, "This is a terrific figure compared to the past years."

The commander said about 20,000 people try to cross into Greece via the Aegean Sea every year including those captured by Turkish and Greek coast guards.

Turkish authorities announced recently that the number of illegal immigrants captured while crossing the Aegean Sea to reach Europe has risen to over 7,500 in the first nine months of 2014, a significant growth compared to 6,937 immigrants captured in one year in 2013. Despite strict security measures, undocumented immigrants flock to Turkey's western coast onboard dinghies that often capsize in the rough sea.

Paying large sums to human traffickers, immigrants travel in crammed and shoddy boats to reach the other side of the Aegean Sea where Greece is located. However, they often end up drowning or rescued at the last minute, with few making it to Greece and only if the formidable Greek coast guard fails to apprehend them. Turkey is a popular route for many illegal immigrants from Middle Eastern and Asian countries.

Particularly Syrians, who took shelter in Turkey due to the ongoing civil war in their country, seek a better life in Europe as Turkey struggles to handle the accommodation and care for some 1.3 million displaced Syrians.