More schools burned down in protest at closure of Kurdish schools 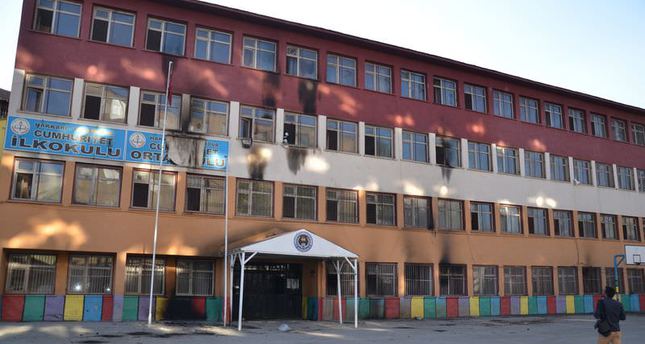 by AA Sep 18, 2014 12:00 am
Four schools were burned down Wednesday night in Turkey's southeastern provinces of Hakkari and Şırnak in protest at the closure of self-proclaimed schools that had planned to teach in the Kurdish language.

A masked group of people came out onto the streets of Yüksekova district in the southeastern Hakkari province Wednesday night to protest against the "sealing" of schools that had planned to provide education in the Kurdish language – an attempt unrecognized by the country's national education authorities so far. The group threw stones and fireworks at police vehicles, which were there to provide security, witnesses said. The demonstrators then broke down the doors of two secondary schools and threw Molotov cocktails in teachers' rooms and classrooms, said witnesses.

Another masked group attacked a high school and a grade school in Cizre, a district of Şırnak, on Wednesday night.

The attacks came one day after rioters set seven schools on fire in three provinces in the southeastern Turkey.

The assailants include members of the Patriotic Youth Revolutionary Movement (YDG-H), the youth wing of the terrorist organization PKK.

The Turkish government has been making democratic reforms to empower its citizens that belong to minority groups, including Kurds. Turkish citizens of Kurdish descent make up 18 percent of the country's population and mostly live in southeastern and eastern Anatolian regions.

The "democratization package," passed by the Turkish parliament last year, legalized education in minorities' mother tongue in private schools.
However, schools that had planned to provide Turkish education were "sealed" by authorities, as they had allegedly not received permission from the ministry to open. A large-scale investigation has been launched after the incident.

In a related development, two Anadolu Agency journalists have been injured while covering a protest over the closure of a Kurdish-language school in the southeastern province of Diyarbakır. Photographer Hüseyin Bağış was stabbed in the leg and reporter Aziz Aslan was beaten on Wednesday as they documented clashes between demonstrators and police in Diyarbakır. Both were treated in hospital.

A group including Diyarbakır Mayor Gültan Kışanak and the opposition Democratic Regions Party (DBP) provincial head Zübeyde Zümrüt staged a march towards a school said to offer lessons in Kurdish. The school had been sealed shut for not having official permission to teach in Kurdish. Violence between the protestors and riot police broke out before a group of demonstrators attacked the journalists. The crowd was dispersed and 50 people were taken into custody, district police said.