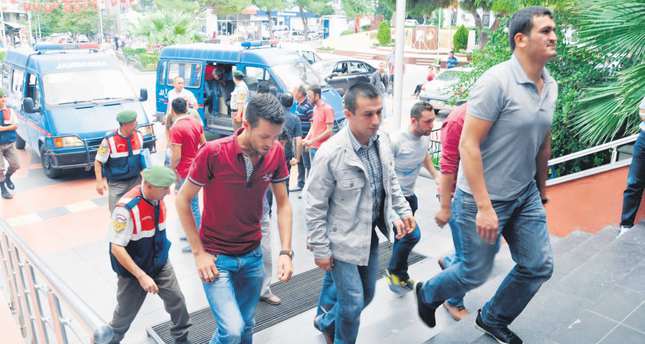 On Friday, a prosecutor questioned 24 employees of the mining company that operates the mine in the western Turkish town of Soma where 301 miners died in an accident in May

The prosecutor conducting the investigation into the May 13 disaster questioned 24 people including employees of Soma Coal Enterprises Inc. They were released after questioning while 11 of them were released on probation The questioning came after a report prepared by experts working on the case was handed to the prosecutor in the Manisa province where Soma is located.

In the aftermath of the accident, Can Gürkan, CEO of Soma Holding that owns the Soma Coal Enterprises Inc., the mine's general manager Ramazan Doğru and six employees of the mining company were arrested on charges of causing death by neglecting work safety. Workers were killed after a fire engulfed the galleries, suffocating hundreds.

The disaster, in which 301 miners lost their lives, affected the whole of Turkey. But for the relatives of the victims, the deep psychological scars still impact on their day-to-day lives. That is why the Soma Solidarity Network Project is still counselling family members and colleagues more than four months after Turkey's worst mining catastrophe.

The team of psychologists, psychiatrists and social service experts arrived in Soma within hours of the May 13 disaster to offer psychological help to the thousands of people devastated by the loss of loved ones. "After the first days, when the issues of survival, search and rescue are dealt with, mental health issues appeared that require a great deal of attention and generally lasted beyond the healing of the physical trauma," project coordinator Suat Özçağdaş told The Anadolu Agency in an interview on Thursday.

The Association of Psychosocial Services in Disasters, which launched the Soma project, estimates a total of 11,000 people were traumatized by the accident. As well as the 255 wives and 432 children of the lost miners, there are parents, survivors and search and rescue team members, all of whom receive rehabilitation help from the project. Most of the near 800 miners underground at the time were saved but the death toll surpassed the 1992 Zonguldak mining disaster that killed 263 workers.

Since the disaster a team of 300 volunteer professionals has been working in Soma and the surrounding region to help the bereaved and traumatized come to terms with the tragedy. "Besides traditional relief aid such as food distribution and basic health care, psychosocial support also saves many lives," Özçağdaş explained. Gökhan Malkoç, president of the Turkish Psychological Association, said the project had been "binding up wounds in Soma since the first day of the mine accident." He added: "We firstly taught them to live with the reality and showed them how their abnormal reactions are actually normal in the face of such an abnormal situation."

Aslı Çarkoğlu, chairwoman of the Istanbul branch of the association, is another project member. "The experience of disaster, whether it is natural or manmade, is an unexpected aspect of life," she said. "Our job is to teach them how to cope with it." The foremost reaction to such life-changing circumstances is anger, Çarkoğlu said, and relatives can carry this anger for a long time. But, she added: "Remaining on the agenda makes them feel better. They know that they are not forgotten or neglected. We will be there nearly a year, until the next spring."

Since the disaster, Turkey's workplace safety record has been under the spotlight, particularly in the mining sector, which has a poor history. According to a 2010 report from the Economic Policy Research Foundation of Turkey, mining was the country's deadliest industry, with 7.2 deaths per million tons of coal mined, the deadliest record in the world. Official statistics report that more than 3,000 coal miners died in mining accidents
between 1941 and April 2014.
Last Update: Sep 21, 2014 4:58 pm
RELATED TOPICS