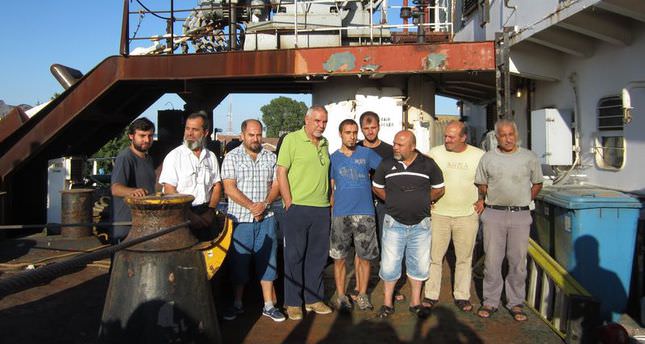 by Daily Sabah Sep 22, 2014 12:00 am
Twelve Turkish sailors, who were stranded in the Canadian port of Sorel-Tracy, Quebec, flew home yesterday after help from locals and Canada's Air Transat carrier.

The sailors has been stranded aboard a ship they had been repairing since April of this year. They claimed the shipping company that employed them had not paid their salaries since June. Their dispute with the company, which reportedly went bankrupt, was followed by Canadian authorities' seizure of the ship from the company after it failed to pay port fees. Although they were offered free plane tickets to return home earlier, they declined, insisting that they would return to Turkey only after they received their unpaid salaries.

They finally ended their self-styled strike over the weekend after Serge Peloquin, mayor of Sorel-Tracy, delivered $10,000 (TL 22,300) to them, donated by locals while Air Transat offered them a free flight.

Speaking to reporters in Istanbul, Semih Özkan, captain of the seized Phoenix Sun vessel, said that Menpas, the company that hired them, deceived the sailors. "The person who brought us to Canada tricked us while we tried to help him by staying for the repair of the ship, even though he did not pay us since he was a fellow Turkish national," he said, referring to Mengü Pasinli, general manager of the company. He said they were not paid and did not receive supplies for a long time. "We had to eat once in two days because we did not have adequate food supplies. A maritime labor organization in Canada revealed our problems and the Canadian press gave us wide coverage. The people of Sorel tried to help us. They delivered food to us. Turkish consulate officials also supplied food to the ship," Özkan said. The captain stated that the legal process regarding their unpaid salaries was underway in Canada and they would bring their case to the European Court of Human Rights (ECHR) as well.