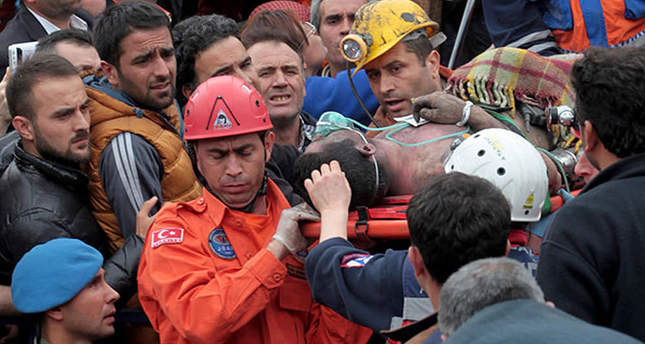 by AA Sep 22, 2014 12:00 am
The Soma mining disaster which claimed 301 lives in May was "preventable" according to a report delivered to a Turkish prosecutor.

The document, prepared after four months' investigative work by an academic team for the Soma Public Prosecutor's Office, was published on Sunday.

Evidence in the report has been presented to the Soma Chief Prosecutor's Office in the Manisa district for consideration. It will form the basis of any future criminal investigation into the disaster which was the worst mining accident in Turkey's history.

According to autopsy results quoted in the report, most of the deaths were due to a form of poisoning where red blood cells come into contact with carbon monoxide.

This toxic gas was produced by a spontaneous fire which broke out in coal dumped around a transformer.

Carbon monoxide produced by this fire met fresh air from an inlet, fuelling a greater blaze.

This spread to the mine's third and fourth corridors causing bands, timber supports, pipes and electric cables to catch fire.

Water and cooling attempts to extinguish the blaze produced the deadly poisonous and suffocating gas, the report added.

However, given the large size of the mine, the fire which broke out underground was not solely responsible for the 301 deaths. Poison gas and suffocation produced by the blaze was the main cause of death.

The report said that former mine owners – state-owned TKI – which took over in 2006, had wanted to divest itself of the facility in 2009.

The company said that it did not want to face any "non-recoverable problems" in the future. TKI could not produce coal from the mine because of fires and flooding breaking out during production.

The report says that this statement from TKI showed that the coal mine had a high fire risk and that both the former company and current managers, Soma Coal Corporation, knew about it.

Although the gas-detecting equipment warned of a coming accident in January, this was not heeded, the report stated.

It added that construction of escape routes from the coal mine was also canceled without concern for workplace safety; this was cited as one of the reasons for the high number of deaths.

The ventilation system was not developed although the number of workers and production had doubled; none of the mine's infrastructure was fire-rated and workers' gas masks had not been checked, the report said.

Gas readings in the mine were taken "randomly". Records did not match gas-sensor data and nine pieces of gas-detecting monitoring equipment were not working properly.

The report also claimed that in some parts of the coal field it was permitted to mine with a single chimney production by using a method called "black tippling". This made it possible to produce more coal but increased the number of workers in the field and associated risks.

The report pointed out that while the mine was expected to produce 1.5 tons of coal in 2013, it actually produced more than double this figure – 3.5 tons.

"These results have confirmed workers' comments that they have been forced to over work and there is over production," the report said.

"Over production, along with not adopting measures that should be taken … led to dangerous working conditions," the report added.

The report also pointed out that not fulfilling the requirement that "ventilators and aspirators should be arranged to flow in the opposite direction when it was needed" had a negative impact on rescue efforts.

It was also claimed that the electrical system of the mine was not safe.

Faulty communication devices and lack of a central alarm system were blamed for a failure to evacuate the stranded miners. The report also claimed that exhausted coal areas were not under control and measures to prevent a possible coal fire were not taken.

The report says a 32-hour vocational training course had not been completed properly and recap training had not been done at all.