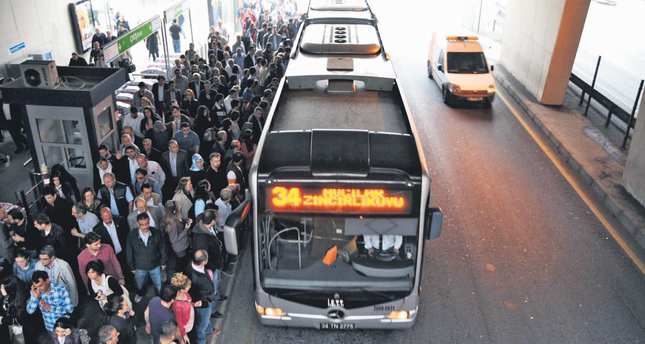 A permanent solution to overcrowding on Istanbul's metrobuses, which offer faster travel, remains elusive though scientists have managed to decrease the number of waiting passengers and waiting time

The metrobuses of Istanbul has been the subject of a study by scientists trying to find a solution to the overcrowding in buses. They succeeded in decreasing waiting times and thus, decreasing the number of passengers huddled at stops. Istanbul's exasperating mass transit system, along with heavy traffic, is one of the major downsides of living in a city that is a top destination among tourists from around the world. Metrobuses, which were introduced in 2007, sought to solve the transportation problem in the country's most populated city, where traveling a distance as short as 5 kilometers can take one hour, especially during rush hour. Although they provide a faster journey, the buses are always packed at rush hours and the metrobuses have failed to offer a comfortable ride.

The first leg of the project was to increase the capacity of metrobuses. Scientists analyzed data regarding passenger trends such as the busiest stops, in terms of passengers getting on and getting off the buses. Calculating the speed of metrobuses and the distance between stops, a statistical analysis was made to create a new model. The analysis found two new lines are required to decrease passenger traffic. The lines launched earlier in September, allow travel from Beylikdüzü, in the far west, to Zincirlikuyu, near the bridge connecting the two sides of Istanbul, as well as from Avcılar, near Beylikdüzü, to Söğütlüçeşme, on the Asian side of Istanbul, without transfering to another metrobus along the route, as was the case before their introduction.

Project manager Fahrettin Eldemir says they looked into solutions to the issue without incurring large infrastructure costs. He said only 407 buses were operating in the metrobus lanes before the project and this number has risen to 450. However, he notes that merely increasing the number of vehicles would not be a solution to the problem. "An average of 700,000 passengers were taking the metrobus daily when we first started the project last year and by November 2013, it rose to 780,000. In March, the metrobuses were working to their full capacity. But the demand for the metrobus will rise again in October and we project an average number of 800,000 passengers daily then," he said.

Eldemir said that new lines considerably decreased the number of transfer passengers, below 18,000 from the 200,000 passengers who previously had to transfer to another bus when traveling from Beylikdüzü to the Asian side. "Buses used to operate at peak times at 108 percent of capacity and with this project it will be reduced to 94 or 95 percent. This means that no passenger will be left at the stops due to overcrowding, even in rush hour," he said.

Mümin Kahveci, head of Istanbul's mass transit authority İETT, says the crowds are less common at stops between Beylikdüzü and Zincirlikuyu. He says the project both lowered costs and reduced travel times. Kahveci said a similar project will be held to decrease waiting times and prevent overcrowding in 750 mass transit lines in the city.
Last Update: Sep 24, 2014 10:59 am
RELATED TOPICS