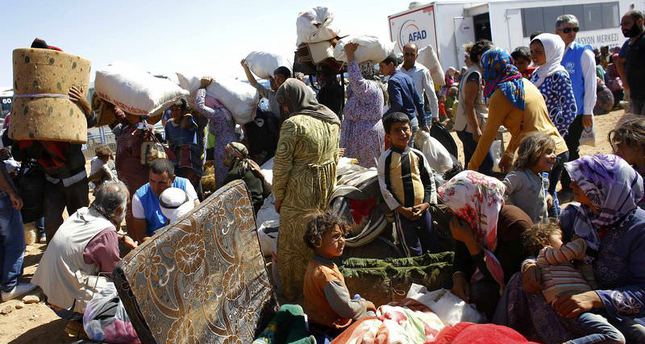 by Daily Sabah Sep 23, 2014 12:00 am
Suruç, a small Turkish town located on the Syrian border, is struggling to cope with the large flow of displaced Syrians fleeing ISIS threat while immediate aid pours in from state-run aid agency AFAD

Syrians fleeing the Islamic State of Iraq and al-Sham's (ISIS) bloody campaign to capture northern towns bordering with Turkey have turned to Turkey for help. The number of Syrians departing the town of Kobani and its surrounding villages into Turkey has exceeded 138,000, Prime Minister Ahmet Davutoğlu said on Monday.

Suruç, a town of 70,000 people in Turkey's Şanlıurfa province located across from Kobani, is now facing social problems due to the sudden influx. Syrians are temporarily taking shelter in parks, unused buildings and warehouses.

Masses from predominantly Kurdish settlements in Syria started flocking to the Turkish border on Sept. 19 and since then, Turkey has launched operations to address the humanitarian crisis in which tens of thousands of people, enduring hunger and thirst, have walked towards Turkey. The country opened its borders to displaced Syrians despite being already embattled with over 1.3 million displaced people from that the country is trying to help with limited resources.

Turkish Prime Ministry's Emergency and Disaster Management Authority (AFAD) is at the forefront of efforts to help the displaced who arrived in the country with few possessions and no food. The authority immediately dispatched humanitarian aid to the region and set up a center for the registration of new arrivals. The displaced are being reunited with their relatives in Turkey but if they have no place to go, AFAD accommodates them at the temporary facilities set up for Syrians. In a statement on Monday, AFAD officials said fieldwork still needs to be conducted for coordinating the hosting of the displaced. The statement said Syrians underwent medical and security screening as well as having food and water delivered.

Turkish charities and the U.N. also offer aid to Syrians in Suruç. Local administrators in Suruç said the U.N. officials contacted them to determine their immediate needs.

Locals, many of them with relatives in Syria, take in the displaced even though their own houses are too small to accomodate them.
AFAD plans to set up a tent camp in Suruç that will accommodate around 5,000 people in a large park in the town. The remaining refugees will likely be transferred to camps in other cities built for Syrians.

Apart from humans, the aid authority is set up to help animals such as cattle and sheep abandoned by their owners fleeing ISIS violence. Syrian Kurds who brought their animals with them while fleeing, left them on a mined zone between the Turkish and Syrian border. Concerned that they would die of starvation, AFAD moved to bring in animals to Turkey as well.

Turkish Deputy Prime Minister Numan Kurtulmuş said on Monday that Turkey was prepared for the "worst-case scenario" in handling the surge of Syrians, assuring that they had the resources to cope with the influx while warning that the number of those crossing the border could rise further to "a refugee wave of hundreds of thousands."

United Nations Refugee Agency (UNHCR) officials said yesterday that as many as 400,000 more people may enter Turkey from Syria. UNHCR spokeswoman Melissa Fleming told reporters that they were preparing for the potential scenario of the whole population of Kobani – which is around 400,000 – fleeing to Turkey. She said that Turkey was allowing entry via two border crossings after security screening, adding, "There is a war next door, very, very close, so obviously, they have to take their own security precautions with their borders."

Noting that Turkey currently houses around 1.3 million Syrians, Fleming said it would a large influx for any country to cope with.
UNHCR had earlier urged the international community to help Turkey, Jordan and Lebanon, who host over 3 million displaced Syrians between them. Stating that the influx from Kobani underlined the importance of financial aid to Turkey, Fleming said, "If you want to put it into proportion, this 138,000 that has just arrived in Turkey represents about the number that all of Europe has taken in in the three years of the Syria war."