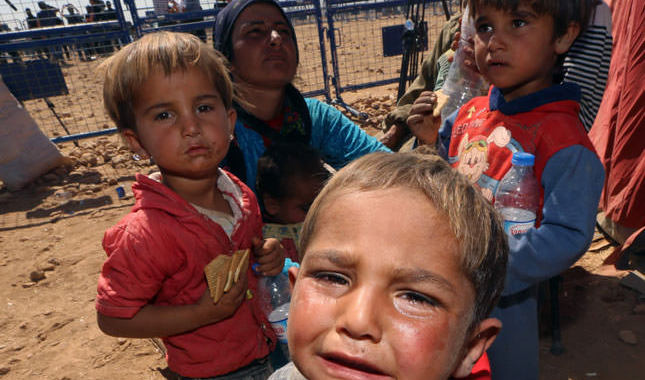 As the number of Syrian Kurds who have crossed the border into Turkey passes 140,000, the security forces have to deal also with the Turkish Kurds who want to cross the other way to fight ISIS

The influx of tens of thousands of Kurds since last week has raised concerns for the country where the conflict in its southern neighbor has already forced over 1.3 million people to take shelter in Turkey. Undertaking a massive aid operation for those fleeing into Turkey, authorities are also struggling to hold off Turkey's Kurds attempting to cross into Syria to join the fight of their brethren against the Islamic State of Iraq and al-Sham (ISIS).

The opposition People's Democracy Party (HDP) and Democratic Regions Party (DBP) are coordinating the flow of members of the Kurdish community across the country to the border. They are looking for ways to travel to Syria's Kobani to join the fight against ISIS with the Kurdish militants of the People's Protection Units (YPG). Exploiting the turmoil on the border, Kurds affiliated with the two parties have confronted the Turkish security forces deployed there. Aysel Tuğluk, a lawmaker from the HDP, was pictured hurling stones at security forces who were trying to quell the flow. Criticized for her assault, Tuğluk claimed soldiers and police on the border have been intervening with the crowd gathered there and she defended herself when a tear gas capsule landed near her. Turkish Deputy Prime Minister Bülent Arınç said Tuğluk "put on a show," adding that it was unacceptable to tolerate illegal crossings into Syria.

Amid a cloud of tear gas and a hail of stones, Syrians continue pouring into Turkey with few belongings after a long trudge. They claim there were a few people remaining in Kobani and its vicinity due to the ISIS threat.

The displaced have been grateful for Turkey's decision to receive them. Speaking to Anadolu Agency, 83-year-old Naci Basri Ali said that they can't thank the Turkish government enough for its aid to Syrians. "They did not let us to stay in the hands of cruel ISIS. Thank God, we reached here safe and sound," he says. For Hazem al-Muslim, 15, Turkey has been "a dream country." "I've never been here but I knew Turkey very well from Turkish TV shows. I am excited to be here. The bad days are behind us and I hope the war in my country will end soon. I am in a country that I wanted to visit very much but I always feel the pain of being far from home," he says. Usvad Ismail says his uncle was killed during an ISIS attack and many relatives were held hostage by militants. He says the attacks destroyed their house. "We left everything behind and came here. We will travel to a town where our relatives live. If Turkey did not open its borders, we would die of starvation and thirst, if not in the attacks," he says.

The Turkish Prime Ministry's Emergency and Disaster Management Authority (AFAD) and local charities reach-out to Syrian Kurds amassed in Suruç, a small Turkish town located opposite Kobani. A temporary tent camp was set up for the displaced and more will be set up as soon as possible but the large number of people coming in presents a challenge for the authorities. Buses carry the displaced to the tent camp throughout the day while others take shelter in spacious wedding halls, parks, unused buildings, et cetera. Government agencies and locals continuously deliver humanitarian aid to desperate Syrians. The Turkish Red Crescent set up a mobile kitchen with a capacity that serves 7,000 people and pledged to increase the capacity of humanitarian aid.

Meanwhile, the EU pledged 215 million euros (TL 616 million) for the displaced in Turkey and other countries hosting Syrians. EU officials said 50 million euros will be allocated to emergency humanitarian aid and the rest will be spent for long-term development projects such as improving infrastructure in places where the Syrian population is concentrated.