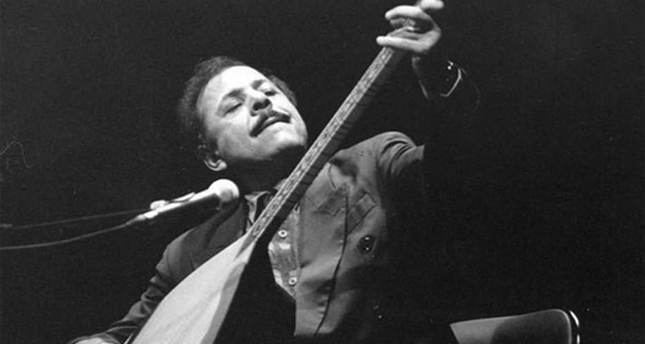 by AA Sep 25, 2014 12:00 am
The life of Turkish folksinger Neşet Ertaş, who died two years ago aged 74 will be commemorated with a state ceremony in his central Anatolian home city of Kirsehir this Saturday.

Fans of the singer and lyricist, who returned to Turkey in 2002 after 23 years living in Germany, have been paying tribute to him by visiting his mausoleum in Kırşehir. They have been coming from all across Turkey and gathering in the city since early Thursday.

Turkish Prime Minister Ahmet Davutoğlu will attend the state ceremony and will also inaugurate the revamped former residence of the Kırşehir governor, known as "Culture House of Neşet Ertaş" which will be dedicated to Ertaş's memory.

Known as the "Plectrum of Steppe" ("Bozkırın Tezenesi" in Turkish), Neşet Ertaş is seen as the last great proponent of a genre called "Abdallık", a name referred to bards dealing with folk music in his hometown Kırşehir.

Ertaş was known for his playing of a musical instrument called saz or bağlama, a type of long-necked lute.

Ertaş was born in the Çiçekdağı district of Turkey's central Kırşehir province in 1938. He learned to play the violin, and then the Turkish three-stringed instrument "bağlama" which is a type of long-necked lute.

He was granted "Outstanding Service Award" by the Turkish Parliament in 2006, and titled as "UNESCO Living Human Treasure and Cultural Heritage Bearer."

Ertaş died at a hospital in İzmir on September 25, 2012 after two-year battle against cancer.