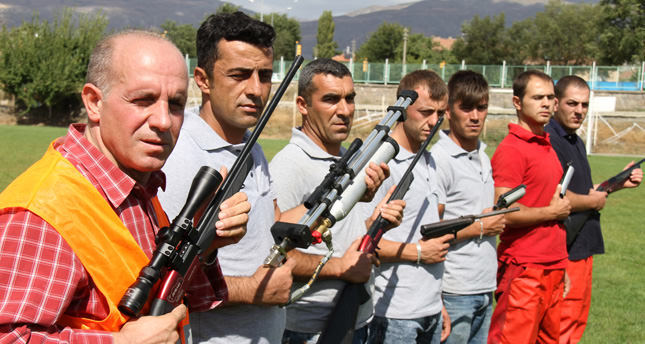 by Daily Sabah Sep 25, 2014 12:00 am
Ahead of Eid al-Adha, the Muslim festival of sacrifice, municipal workers in an eastern Turkish town polish their skills for a task peculiar to Turkey: Catching aggravated bulls and other sacrificial animals fleeing the ritual killing.

The Erzincan municipality has been hiring workers to prevent bulls and other animals from rampaging around the city before and during the festival. A team of six is trained on how to intervene with rampaging cattle and this year, two workers on horseback were added to the team to facilitate the capture of bulls in areas inaccessible to motor vehicles.

The team attends a boot camp for two hours a day, doing exercises to stay fit in this reverse bull run. Apart from exercising, they are trained in how to use tranquilizer guns and lassos, which can be used to stop the bulls.

The municipality also allocated a hotline to the team for locals who cannot restrain their sacrificial animals on their own.

Similar teams and hotlines will be set up in other Turkish cities as well.

Eid al-Adha, which will be observed on Oct. 4 in Turkey, is a four-day religious holiday dedicated to the Quranic account on Prophet İbrahim (Abraham), who was given a ram by God while he was about to slay his son upon God's order. Eid is observed by ritual killings of the livestock, but killings that go awry make headlines every year, with hundreds rushing to hospitals after they injure themselves during the slaughter and others chasing around the fleeing bulls.