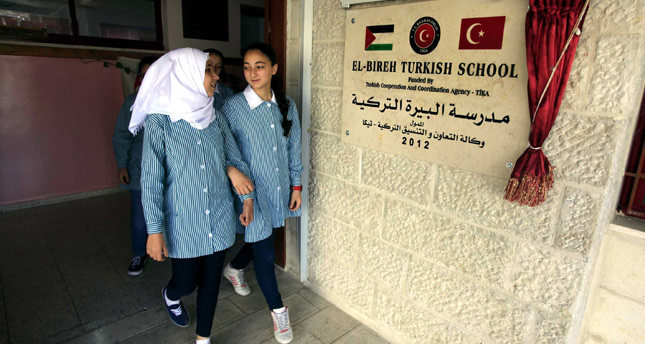 by AA Sep 25, 2014 12:00 am
The Palestinian Authority government has signed an agreement with Turkish authorities for Turkish lessons to be taught as an elective course at schools in the West Bank. Turkish classes will be opened "in the near future," Palestinian officials said.

The Palestinian Ministry of Education and Turkey's state-run aid and development agency TİKA signed the protocol for elective courses earlier this week.

Turkish classes will be initially provided in three schools in the West Bank's Ramallah, Nablus and Jenin.

Haloud an-Naser, an official from the Palestinian ministry, said the classes will be opened as soon as textbooks from Turkey, provided by TİKA, arrive. He said students from seventh to 10th grade will be offered elective courses three times a week.

Along with textbooks, Turkey will pay the salaries of Turkish teachers and provide their training. An-Naser said they conducted a poll among 120 students to gauge the level of interest in learning Turkish among Palestinians. A total of 111 of them said they would prefer the selective course if it was made available.

Rua Rabi, a 10th grader, said she would take Turkish courses and was pleased that her school would offer the course. "I want to learn more about Turkey and Turkish culture. We love Turkey very much because of its aid to the Palestinian cause," she said.

Hiba Azzam, an eighth grader, said learning Turkish would help her achieve her ambition of going to university in Turkey.

Turkey, since the Justice and Development Party (AK Party) took power in 2002, has become a fervent supporter of the Palestinian cause, defending the establishment of a Palestinian state and the lifting of the Israeli blockade. President Recep Tayyip Erdoğan, who served as prime minister in previous AK Party governments, enjoys a level of popularity among Palestinians both in Gaza and the West Bank.