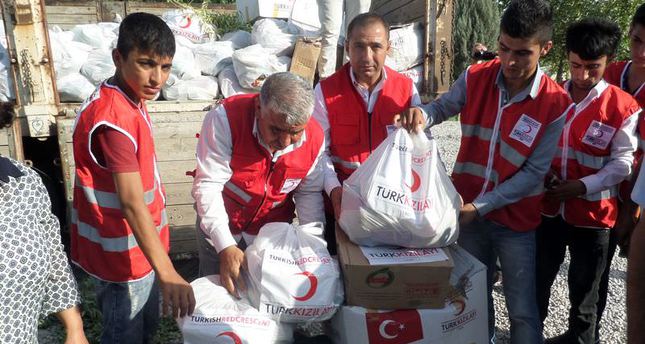 by AA Sep 26, 2014 12:00 am
As part of the humanitarian aid operation to Syria which began around four years ago Turkish Red Crescent has spent 700 million lira ($310 million) on Syrian refugees in Turkey and aid into Syria itself.

For the last four years, Turkish Red Crescent has been providing food and other necessities for 250 thousand Syrians living in 24 housing centers.

The Relief Agency is sending aid materials such as tents, blankets, beds, flour, sugar, bread, drinking water and medical equipment to the interior of Syria from Turkey's southern provinces of Hatay, Kilis, Gaziantep, Şanlıurfa and Mardin.

The Agency also accepts the donations from philanthropists, national and international institutions.

The Turkish Red Crescent also provides water and hot meal three times a day to the Kurdish refugees who were fleeing from the clashes in the Syrian city of Kobani to the border town of Suruç.

A total of 160,335 Syrian Kurds fled to Turkey in the last week alone, escaping from ISIS attacks in the northern Syrian town of Kobani, said Turkish Prime Minister Ahmet Davutoğlu on Friday.

Turkey opened the frontier last Friday to cope with a rush of Kurdish civilians fearing an attack on the Syrian border town of Ayn al-Arab, known as Kobani in Kurdish, in the province of Raqqa.

ISIS has captured large swathes of land in Iraq and Syria, declaring what it calls a cross-border Islamic "caliphate," killing thousands of people and displacing millions in the two countries.

ISIS militants have taken the Raqqa, Dair az Zor and al Omar oil fields in the north of Syria since last November. They have continued to seize large amounts of territory in Iraq since June when they captured the northern city of Mosul, including the largest oil refinery, Baiji, and claim to hold around 17 percent of Iraq's oil resources.