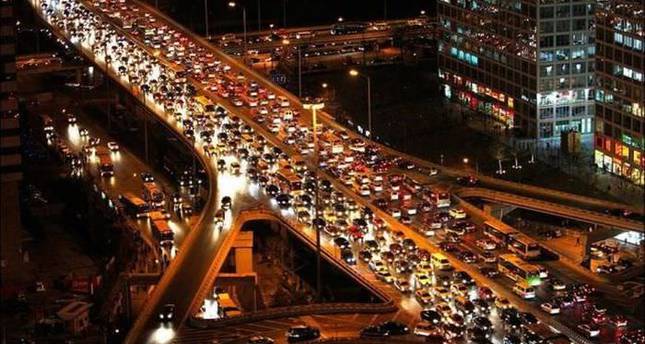 by AA Sep 27, 2014 12:00 am
A recent official report on possible transportation policies, made public last August, has suggested the implementation of an entrance fee to enter central areas of the city in order to reduce traffic. The measure has sparked debate among city residents and in the media, with numerous articles on the subject being written in several Turkish dailies. The prospect of paying an entrance fee has been disquieting to car owners who don't want to pay any additional fees.

Count TL 4.25 ($1.9) each time you cross from the European to the Asian side over one of two bridges (according to data from the Turkish General Directorate for Highways). Add TL 10 to 15 ($4.5 to $6.7) if you want to park your car in one of the central districts of Istanbul, for more than four hours in a day (according to Istanbul Municipality's parking department İSPARK). Take into account an average of TL 375 ($167) to be paid annually to the directorate of tax administration for motor vehicles, and almost TL 370 ($165) for automobile insurance on a brand new car, it indeed becomes expensive to be a driver in Istanbul. The whole process costs around TL 4,730 ($2,112) each year. The debated report on transportation policies by Faruk Cirit of the Turkish Development Ministry proposes an addition to the toll in order to be able to enter the city center, a measure that has proved effective in certain European capitals.

The report gives the example of Oslo, in Norway, which imposes a toll of $4.8 to "250,000 vehicles each day," a measure that has decreased traffic significantly, Cirit writes. In London, a similar measure, implemented in 2003, brought a 21 percent decrease in car traffic by 2009, according to a report by Urbanet Analyse, a Norwegian company that specializes in market analysis on transportation issues.

Mustafa Ilıcalı, who is a transportation consultant for the Istanbul Metropolitan Municipality, says that the main reason for Istanbul's traffic jams today is that almost 85 percent of vehicles don't have an additional passenger. He proposes separating one of the lanes during peak hours and reserving it only for public transportation vehicles and cars with more than two passengers in order to decrease the number of cars by 30 to 35 percent. He also suggests increasing service by sea, which represents only 3 percent of the city's transportation in Istanbul.